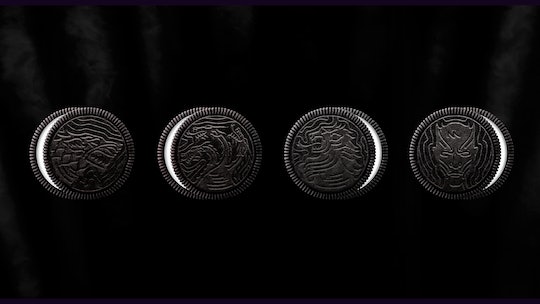 When an already-iconic snack that's been a pantry staple in households for decades puts out a limited edition variety of the original classic, fans are guaranteed to buy them up in bulk. But when that limited edition snack ties in to one of the most popular TV shows ever? You can expect a full-on frenzy. That's why anybody interested in getting their hands on a package of the brand new, limited edition OREO Game of Thrones cookies probably shouldn't put their grocery shopping off for too long. (What if your local grocery store doesn't re-stock in time for the season premiere?)

Expected to be one of OREO's "largest limited-editions ever," according to a press release, the Game of Thrones pack "features cookies with four unique embossments spotlighting the Great Houses still battling for the Iron Throne and the enemy White Walkers beyond the wall." That means you're getting the cookie you know and love, except that instead of the usual trademark pattern you're getting four brand new designs representing the houses Lannister, Targaryen, and Stark, as well as The Night King himself.

If you've never looked very closely at an OREO, you might not have noticed that the cookie's everyday design is surprisingly intricate. I've always found it somewhat fascinating, so it makes sense to me that the round chocolate wafer would make a worthy canvas for the GoT sigils. Here's the famed Lannister lion in cookie form:

Who knew an OREO could be so intimidating? (The little throne helps.) House Stark's dire wolf is equally fearsome when edible:

The three-headed Targaryen dragon is a chocolate masterpiece...

... and the Night King is almost too scary to eat.

But being *almost* too scary to eat probably won't be enough to spare the White Walker from being plunged headfirst into a glass of milk. Winter is over, dude!

Personally, I think all the designs are pretty great. (OREO is known for successfully pairing up with other iconic brands, from Disney to IHOP, so why wouldn't they be?) If you have a favorite GoT cookie, however, cast your vote for House Lannister, House Targaryen, House Stark or The Night King by visiting either oreo.com or OREO’s Facebook and Twitter (using #GameofCookies and #ForTheThrone). If you do, you might be one of the fortunate fans selected by OREO throughout the season to be surprised with a "special treat" for participating.

There's even more to this epic cookie collaboration, believe it or not. OREO and HBO also partnered with the Elastic (creators of the Game of Thrones opening sequence) to create an OREO version of those hypnotically cool credits featuring an "animated landscape built entirely out of 2,750 OREO cookies."

I was skeptical that such a feat could be accomplished, but the OREO Game of Thrones opening sequence is actually mind-blowing. If this doesn't make you both incredibly excited for the new season of GoT and incredibly hungry for OREOS, I just don't know what to say:

Can you imagine how many people are going to learn the hard way that making a video like this is much, much harder than it looks? I'm picturing so very many wasted bags of OREOs... so very, very many crumbs.

Whether you're hoping to animate your OREOs or just eat them (while you watch the season premiere, definitely), the cookies will go on sale nationwide starting April 8, wherever OREO cookies are sold. But don't delay... they'll only be available while supplies last.