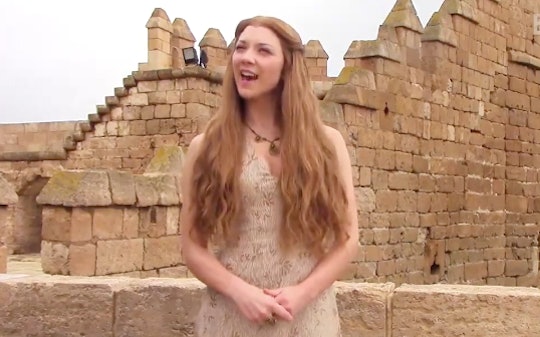 'Game of Thrones' Theme Song Gets Lyrics, Courtesy Of The Hilarious HBO Cast

Five of the ass-kicking ladies of Game of Thrones got together to create a little beautiful music fusion for our listening pleasure. Gwendoline Christie (Brienne of Tarth and founder of the "I Heart Renly Baratheon" fan club); Maisie Williams (The Girl With No Name formerly known as Arya Stark); Emilia Clark (Queen Daenerys Targaryen, Mother of Dragons etc.); Sophie Turner (Sansa Stark, whose day is finally coming, I think); and Natalie Dormer (Queen Margery Baratheon, Most Loyal Sister Ever) had a brilliant go at Ramin Djawadi's original theme song, and their hilarious results that have us all thinking these girls would be seriously the best co-workers on the planet. Not only are they badass as all get out, they clearly like poking a little fun too. Perfect #SquadGoals material. Especially because swords.

Each of the women had their own idea for lyrics: Emilia Clark wanted "dragons and no men" which sounds an awful lot like Dany (although she and my TV boyfriend, Dario Naharis have been getting pretty handsy for awhile). Natalie Dormer, looking regal and pensive as befits her queenly status, simply thought of linking House sigils together. Sophie Turner thought a long stream of character names might do the trick.

"Then there's Arya, then there's Sansa then there's Theon, then there's Cersei, then there's Daenerys, then there's... everyone else," she sings in the must-see video. I find it interesting that Sansa's recently deemed hero/travel companion Theon Greyjoy was the only man mentioned, but we'll leave that for another time.

My two favorites though? Maisie Williams' idea to just sing "death and boobies" until the song ends, since those are the recurring themes of the show, apparently. And Gwendoline Christie felt interpretive dance might be just the thing. Brienne of Tarth had a pretty rough night on Sunday; I hope the interpretive dance helped her work out some of her aggression in a more peaceful manner.

This isn't the first time the cast of Game of Thrones have gotten together for a little lighthearted good fun (which they must need pretty desperately, considering the subject content of the show). Maisie Williams played a fairly fantastic prank on fans by pretending to be a store clerk in a hobby store recently, and will any of us ever forget Chris Martin and Coldplay's "attempt" to make Game of Thrones: The Musical?

So clearly, despite the murder, the debauchery, the scheming, the raping, and the kidnapping, the Westerosi folks are still making time to do a little dance and sing a little song. Because life is good, even when you're a Game of Thrones character, right? (Well, for everyone except for Jon Snow, I guess. Or Oberyn Martell, or Ned Stark, Robb Stark, Catelyn Stark... never mind.)