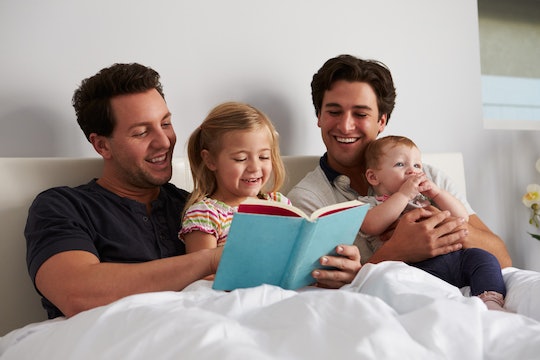 Sometimes it seems like our world is never getting any better. Climate change is still very much a thing, as are climate change deniers. Racism, sexism, homophobia; none of this has been completely eradicated as a person might have hoped would happen by 2019. And yet, there is still a nice shiny light at the end of the tunnel. Because a recent study found that gay dads make excellent parents, and just the knowledge that such a study exists is cause for a little celebration.

A seven year study conducted by Eric Feugé of the University of Quebec in Montreal looked specifically at how gay fathers interacted with their children. The long-term study observed 46 families, including 92 gay fathers and 46 children under the age of 9, according to Pink News.

Most of the men in the study had adopted children who had been removed from their biological families for their own protection, according to The Montreal Gazette, which can understandably be more of a challenge considering potential emotional or physical trauma. And it seems that, according to the study, a full one-third of the children adopted under the social services umbrella in Montreal were adopted by gay parents since it became legal in the province of Quebec in 2002.

Feugé explained to The Montreal Gazette that he was looking specifically at gay dads to see how they engaged with their kids.

"One of my main objectives was to study the degree of engagement of gay fathers, and how they distribute parental work," he told the publication. "I wanted to see if that had an effect on the adaptation of the children; and to understand the determinants of (the fathers’) engagement — why some fathers get involved in certain areas of their children’s lives rather than others."

And as he explained to The Montreal Gazette, “There was a high degree of engagement in all types of parental roles."

Feugé went on to note in his study that there tended to be one father who did a bit more than the other, leading the researchers to categorize the dads into primary and secondary caregiver roles, according to The Montreal Gazette.

Beyond that, he found that gay dads had a tendency to express a wider range of expressions compared to heterosexual couples. According to LGBTQ Nation, Feugé explained: "They could be playmates, caregivers, protectors, role models, morality guides. What’s really interesting is that they don’t conform to roles of conventional fathers. They were able to redefine and propose new models of cultural notions of paternity and masculinity."

The study comes at a time when gay dads are beginning to see more representation in the media, with Bravo host Andy Cohen and How I Met Your Mother star Neil Patrick Harris frequently taking to social media to share their stories.

While this study might have been comparatively small, the impetus behind it is vitally important, as Feugé told LGBTQ Nation:

My main objective was to reassure health professionals and people working with families, to reassure them that same-sex couples are excellent candidates for adoption, and to combat stereotypes that say that men are not able to take care of young kids.

This study also lines up with previous studies, which found that children raised by same sex parents fared well psychologically and developmentally, like this 2018 study from Italy published in the Journal of Developmental and Behavioral Pediatrics.

So there you have it. Gay dads are doing pretty great. I feel like I knew that already, but it's really nice to have some studies to back things up, you know?