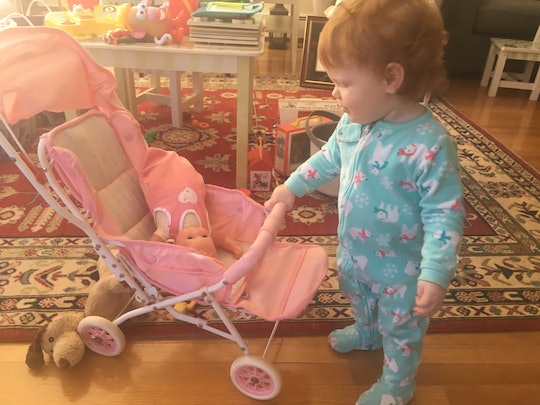 A woman on the subway looks at my bulbous shape and asks, “What are you having?” I take a deep breath and throw a glance to my 5-year-old. “I’m having a baby,” I say to the woman. “No, no” the woman says laughing as she pushes further. “Are you having a boy or a girl?” My 5-year-old is familiar with this line of questioning and pipes up, “We don’t know yet. Only the person being born can decide their gender.” I smile and I feel a warmth in my heart, despite the confused look on the woman’s face. I practice gender-neutral parenting and my 5-year-old’s gender identity, pronouns, and names have changed many times over the past three years.

I’ve always deferred to my child regarding their name, gender, and pronoun usage and have supported those choices and explorations. And I plan to do the same with my second child.

Many millennial moms-to-be are planning extravagant and clever gender-reveal parties, indulging in kitschy reveals like opening a giant cardboard box to release either blue or pink balloons into the air to indicate that they are giving birth to a boy or a girl or cutting into a decadent “GUNS OR GLITTER” buttercream cake to find either a pink or blue dessert. But other parents, like Anastasia Fujii, are rejecting the idea of gendering our children. “Having a vagina or a penis in no way pre-determines who a child can or should be," they tell me.

Fujii, who identifies as a non-binary parent, defines gender-neutral parenting as engaging in the practice of parenting in a way that is liberated from the false dichotomy of the gender binary. "I am intentional about following my child’s lead around identity and expression," Fujii says. Their goal is to build a community for their child that values "a child as themselves, and not as their assigned sex.”

Many individuals still confuse the concepts of sex and gender and use these terms interchangeably, but “sex” is an anatomical term, and “gender” is a social construct. But beyond being conscious of how we absorb and pass along gender constructs, gender-neutral parenting encompasses a range of views and approaches. True to its mission, gender-neutral parenting is anything but black and white.

Other parents, like Zoe Williams, who serves as administrator for an international parenting group called “Theybies,” believe that gender-neutral parenting still enforces the idea of the gender binary, and prefer to use “gender creative” or “gender expansive” to describe their parenting. Williams explains, “We see gender as a spectrum, and there’s not really a neutral point on a spectrum.”

“I don't love the word ‘neutral’ because it suggests "in the middle," Chrystal Sparkles, an artist and parent in Petaluma, California, tells me.

Children begin to experience themselves through a gendered lens beginning at 2- to 3-years-old, and Fujii says that now that their child is that age, they value his needs and wants over their own when it comes to making choices about what he wears, day-to-day, or what activities he may want to try.

Fujii explains their methodology, “I think that this practice, in addition to being an important tool for allowing a child’s true gender identity to emerge, is also an early example of demonstrating the importance and value of affirmative consent.” Simply, they are giving their child a voice at a very young age.

Elissa Robertson believes the best way to subvert stereotypes is to lead by example. “We do our best to avoid giving the impression that any activity, hobby, or job is specifically for men or women,” she tells Romper. In her view, “It’s about redefining what it means to be a ‘girl’ and what it means to be a ‘boy’, as well as giving the support and freedom for our child to choose what works for them. When I’m out with my child and a stranger says ‘What a handsome boy’ or ‘What a pretty girl,’ I don’t really feel it necessary to correct them based on my child’s genitalia.”

Good news for every parent out there who doesn’t pin a bow to their child’s bald head every time they venture out.

Creating a space to tolerate and celebrate a child’s discovery of their identity is more important than ever to millennial parents.

Allison Tremblay, who is a parent to a 14-month-old and the partner of an intersex, nonbinary person, opts primarily for non-gendered toys for their child. “To me, gender-neutral parenting is parenting without expectation and social pressures of gender,” she tells me.

Tremblay, who references the book Parenting Beyond Pink And Blue and the Facebook group Gender Neutral Parenting Listening and Learning, as primary resources in her parenting, goes on to say, “Generally we do gravitate toward what would typically be used by all people, rather than something designed ‘for girls’ or ‘for boys,’ but that tends to be more about our personal preferences — we like wooden and natural-type toys and stay away from the pink or blue plastic ones that makes noise.”

In 2015, after Target stores received a series of complaints from their customers regarding the blatant gendering of the toys in their stores, Target announced “Our teams are working across the store to identify areas where we can phase out gender-based signage to help strike a better balance.” The statement explained that references to gender in signage and the color-backing of shelves would be removed.

In a society that is obsessed with gender — and manipulating and detecting gender in fetuses as soon as possible with baby gender-prediction kits, 3-D and 4-D ultrasounds and so-called “designer babies” — creating a space to tolerate and celebrate a child’s discovery of their identity is more important than ever to millennial parents. Screening technologies in particular are pushing the determination around sex earlier and earlier, while consumer choices throw you in a gendered world if you don’t opt out of it. That is, having a child often opens peoples’ eyes to just how gendered society can be.

Robertson reflected on how gendered socialization had negatively impacted her and decided she needed to do something different. She explains, “I was concerned about the unintentional messages I would be sending my child about their own identity if I didn’t strive for neutrality.”

Push-back against gender nonconformity in one’s parenting goes beyond that of family or societal disapproval. Anna Cherepanova, a Russian parent of a 7-month-old baby living in the U.K., works as an activist on trans and intersex issues. She tells me that visiting Russia provides the biggest threat. “We worry that the government may find out and take measures to take our baby away," she says. "There were recent cases when adopted children were taken away from parents who crossed gender lines." Russia has put a ban on same-sex adoption of Russian children.

Cherepanova also mentions that their wife’s family also disapproved of gender-neutral parenting as an idea and says they were shunned at family events.

She feels safer in the U.K., but says that there is constant social gendering and that Mrs/Mr titles are used in almost all social situations without options to choose something else or not have a title at all.

Humans find comfort in classifying things. It helps us understand the world, but it also risks reducing our experience. As Robertson explains to me, it can lead to “Black or White, Us or Them.”

We live in a cissexist heteropatriarchy and I am only one person in my child’s life.

Robertson also sees a patriarchal underpinning. “It’s also a big part of the power dynamics that play a leading role in society. Traditionally men have held more power in society than women, so we’ve been socialized to put heavy importance on gender. We’ve been conditioned to use gender as a way of assessing what someone’s strengths are or what their worth is...”

Fujii echoes this sentiment, “We live in a cissexist heteropatriarchy and I am only one person in my child’s life. While my partner, our child, and I have an amazing community and strong allies in our lives, society is far from affirming (in fact, it is often flat-out rejecting) of the way that we see and experience the world. This is a daily struggle personally, and it is no different in parenting.”

For some individuals, gender-neutral parenting and a mindfulness surrounding gender identity seem to come more directly to the forefront in queer parenting communities.

Kit Bissonette tells Romper that their nonbinary identity led them to discover the community of gender-neutral parents while they were pregnant. “Being nonbinary, there was no other option in my mind, I was not going to risk my child having gender-based trauma like I do.”

Fujii shares in this experience as a nonbinary person. Many of the tools they utilize when it comes to thinking about gender and parenting come from their own lived experience. Hopefully, parents like Fujii believe, their children will have greater opportunities to develop a sense of self. And in the short term, lessons from the queer and trans parents in their life often expand the possibilities of who they can become as a parent.

And there is certainly a market for toys and clothing that reject the binary.

Companies like Goldie Blox are producing action figures and building sets featuring the world’s first girl engineer character — a gig that Mattel has gotten into with its limited-edition iconic Barbies.

Fujii and their partner are helping to create more visibility around gender-neutral parenting by producing and selling a onesie and toddler shirt on Etsy that reads “BABES AGAINST THE BINARY.”

Fujii gushes with pride as they tell me, “It’s been really wonderful to see them show up in photos from pride parades and trans day of visibility actions all over the country/world!”

Despite growing visibility, there continues to be a perpetuated misconception that gender-neutral parenting’s focus is on raising “genderless” children.

Debrah Soh, a sexual neuroscientist at York University in Toronto, wrote in an article for the L.A. Times, “The Futility of Gender Neutral Parenting”: “The scientific reality is that it's futile to treat children as blank slates with no predetermined characteristics. Biology matters.”

While biology matters, to say that it intrinsically determines who our child will be and what gender expression they will choose contributes to the erasure of children who identify as nonbinary or transgender, or enjoy expressing the masculine and feminine parts of their identity.

Tremblay hopes to continue some form of gender-neutral parenting throughout her child’s childhood. “I plan to put no gendered expectations on my kid. But I do know that my kid will someday pick a pronoun and a bathroom, and that pressure will increase once we enter daycare and school,” Tremblay says.

An organization based in the Bay Area, Gender Spectrum, is working to provide resources and trainings for schools, families, and organizations on how they can eliminate gender bias and implement anti-bias curriculum in their schools.

Although there are parents and organizations standing up against the heavily prevalent gender binary and gendering of our children, these voices — if not big, bold, and brave — are still in the minority.

To Fujii, it ultimately comes down to letting your kids be who they are. “Parents get overly invested in their kids being just like them/being 'normal,'" they say, "and miss out on opportunities to know their kids’ true selves.”