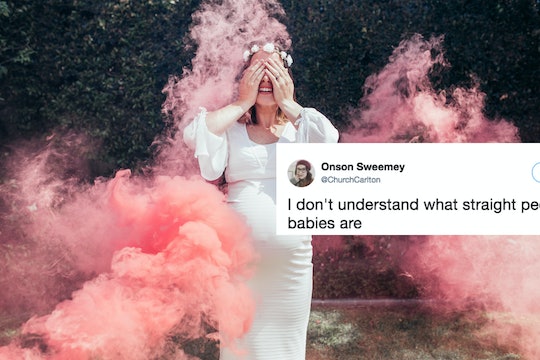 Nowadays, many expectant parents choose to find out their baby's gender while they're still in the womb, with help from a pretty simple ultrasound. However, that process is relatively new — obstetric ultrasounds were only introduced in the '50s. And as that process became more commonplace, so did the sex reveal party. Sex reveal parties have seriously evolved, with parents staging a variety of elaborate ceremonies to announce the news. For example, some parents have someone bake them a cake that, when sliced into, reveals either a pink or blue filling; others shoot at a target that promptly explodes with either blue or pink powder. The list goes on and on. However a recent viral tweet pointed out that some sex reveals have seriously gone too far, utilizing gender stereotypes in a ridiculous way.

Twitter user Onson Sweemey‏ came across a few photos of over-the-top sex reveals, and she shared her thoughts in a tweet. "I don't understand what straight people think babies are," she wrote alongside the photos of highly-gendered cakes and banners. Each compares two things that are meant to represent girls versus boys. "Will it be a cupcake or a stud muffin?" reads one cake. Another compares touchdowns to tutus, another compares tractors to tiaras, and a banner compares pistols to pearls.

The tweet went super viral, racking up more than 33,000 likes, 11,000 retweets, and hundreds of responses. And as one might expect, the responses are absolutely hilarious.

Some made jokes about an expectant mother giving birth to one of the aforementioned objects instead of a human.

...as well as some ridiculous ones they made up.

And others posted more specific criticisms.

Furthermore, people pointed out how ideals of masculinity and violence are pressed upon boys before they are even born.

And others specifically criticized the "cupcake or stud muffin" cake for sexualizing unborn male babies.

Basically, while sex reveal parties are often orchestrated with the best of intentions, they are almost always underscored with gender stereotypes — especially when they feature cakes that say things like "tractors or tiaras." Not to mention, sex reveal parties are often referred to as gender reveal parties. This isn't quite accurate, as all that's really being revealed is the unborn baby's genitalia, which is indicative of sex, not gender. As explained by Monash University, an individual's sex has to do with "biological differences; chromosomes, hormonal profiles, internal and external sex organs," while gender is the "characteristics that a society or culture delineates as masculine or feminine." Gender is a social construct and not a binary, so to reduce it as such — especially with language like "touchdown or tutus" — before a baby is born can reinforce gender stereotypes.

A mother explored the idea of whether or not a feminist can have a sex reveal party for their baby in an essay for Parent Co. She explained that after considering multiple avenues of a sex reveal among family and friends, she concluded that "there simply was no ethical way to hold a sex reveal party." She added that her children already have to live in a world that pushes the gender binary and stereotypes, and that she doesn't want to be another person who adds to that.

That being said, it's every parent's choice how they choose to find out and reveal the sex of their baby. There's no wrong way to share the news — but to be safe, everyone should probably at least stay away from banners that read "pistols or pearls."