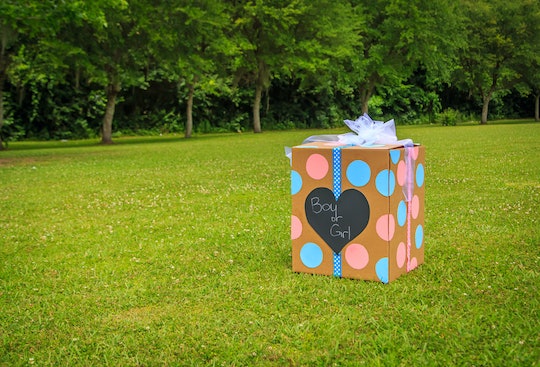 With both of my children, I looked forward to the almost halfway points in my pregnancies where we found out what their sex was. Even though I was excited, I did have a moment each time when I wondered why it was so important for me to find out what my kids' sexes would be. I think, in a way, thinking too deep into it would force me to face the fact that I believed sex and gender were constructs created by society, that they didn't actually hold any purpose or meaning for me. I also didn't grasp the difference between sex and gender until much later. Monash University explains sex and gender as:

...while your sex as male or female is a biological fact that is the same in any culture, what that sex means in terms of your gender role as a "man" or a "woman" in society can be quite different cross culturally... In sociological terms "gender role" refers to the characteristics and behaviors that different cultures attribute to the sexes. What it means to be a "real man" in any culture requires male sex plus what our various cultures define as masculine characteristics and behaviors, likewise a "real woman" needs female sex and feminine characteristics.

I was attached to the idea that finding out the sex of my child meant finding out the gender of my kid, too. As I've gotten older, I've learned that the sex and gender don't actually go hand in hand. That there isn't just one or the other, that there is a spectrum, and that where someone is on the spectrum is up to them, not their parents, not society.

Even when I was attached to the idea of gender being an important part of raising my children, I never agreed with gender reveal parties. Of course, I don't want to knock people who put planning and energy into parties surrounding cutting into a cake to see if it's blue or pink, or opening a box full of colored balloons, but I find it all very ridiculous. Celebrating the sexes of our children as if somehow knowing that will set the course of their life isn't fair, in my opinion. I understand the desire to plan your child's life around whether or not you're having a "boy" or a "girl." I did it too. Except when I realized that my gender and sex identity were determined by the society around me and the expectations my parents placed on me, I wondered if that was healthy. Was it OK that I placed ideas of what gender is on my children based on their sex? Was it healthy?

One day, years later, I was working and my daughter said, "Sometimes I don't think I'm a girl, mom. I think I'm a boy and a girl. Is that OK?"

My kids are 6 and 7 now, and I kind of regret making their sex such a big deal. I wonder why, culturally, there's so much emphasis put on our children's sexes. Why force a construct onto a child that leaves them with only two choices: Femininity or masculinity. When my ex-husband and I found out we were having a girl, or I should say a child who had female genitalia, I remember that my ex-husband and I made a pact to allow "her" to do masculine activities. (My daughter, Riley, switches back and forth between "they" and "she" pronouns.) We'd encourage blues and greens and not just pinks and purples, and support her if she wanted to play certain sports that aren't always seen as sports "for girls." My ex-husband and I thought that that would be enough, that we'd broken down the gender construct enough.

Then one day, years later, I was working and my daughter said, "Sometimes I don't think I'm a girl, mom. I think I'm a boy and a girl. Is that OK?" In that moment, her life flashed in front of my eyes, and I wondered if I'd somehow pushed her into the role of being a "girl," if I had been lazy and relied on the world around me to dictate to her who she was, if I had defined her long before she ever had the chance to. I also wondered if I was prepared for this moment, or this conversation, even though I identify as gender queer. I told her, "Duh! Of course that's OK! You are exactly who you see yourself as. That doesn't have to be a 'boy' or a 'girl.' You can be a person." And Riley said,

That's exactly what I think I am mom: a person. I like boy and girl things, I just like things.

It gave us an opportunity to talk about how being a "female" doesn't mean anything other than what we have as genitalia, and that it doesn't determine who we are as people. It doesn't dictate what we do with our lives. While we live in a society that tries to determine our career, our place, and our purpose based on our sex, we still get to make the final choice.

If I do ever have more children, there's no way in hell I'll be finding out their sex.

This conversation with my own child, and conversations with friends who are raising trans children, helped me understand exactly why sex reveals leave me feeling uncomfortable. Building up this idea of who a person is around someone who has yet to even enter the world is overwhelming and unfair to me. Even when I was a child, I struggled with feeling like I couldn't act in certain ways because it would mimic that of a boy too much. I was always instructed to sit like a "lady," and that "young ladies don't use that kind of language." I caught myself repeating those words to my own child when she was about 5, and when I heard those words come out of my mouth, I was horrified. I'd never really understood the weight of these responsibilities until I said them to my own child.

Now I overhear my daughter talking to other kids about gender and about how it changes, and you don't have to be one or the other, how you can be many things. There are times where she wants to be "they," and other times where she'd like "her" or even "him." When my son, who is constantly and proudly proclaiming he's a boy, says he wants to play with a "boy" toy, she says, "There is no such thing as 'boy' or 'girl toys.' There are just toys," and I secretly celebrate from the other room.

When we talk about future siblings, the kids don't care what or who their sibling might be, just that they have one. I realize that if I do ever have more children, there's no way in hell I'll be finding out their sex. I don't even think I would assign a gender to them until they decided themselves what their gender is. I want my children to define themselves before they ever worry about living up to someone else's definition of them.