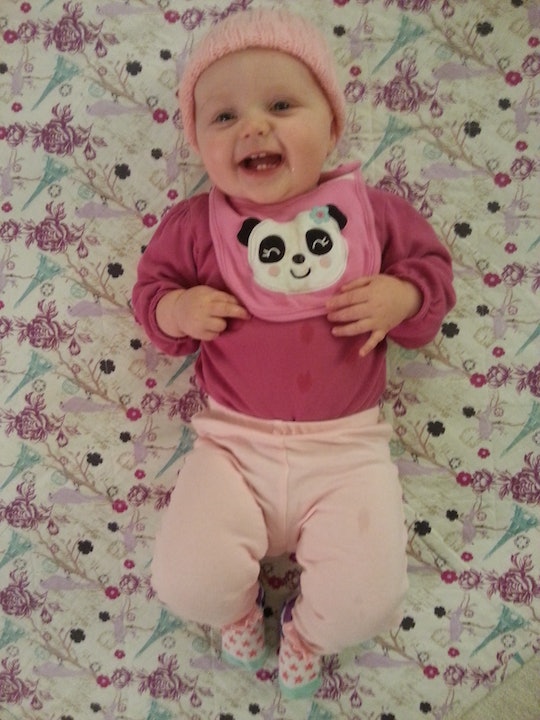 Whenever I'm out with my daughter, I can pretty much guarantee that at least one stranger will confuse her for a boy. "Oh, he's so cute!" they'll say, and I'll agree, because, well, she is. And I'll clarify — "She is. She'll be 1 year old soon!" — which usually causes the stranger to apologize profusely. My daughter gets confused for a boy and while people's confusion doesn't bother me, the reason for their confusion does.

My all-time favorite gender confusion moment came when my daughter was about 6 months old. We were strolling the mall and a woman about my grandmother's age said, "He is just precious." I smiled and told her, "She's actually a she but yes, she is." Mrs. Grandma was very apologetic, commenting that since my daughter was dressed in green she thought she had to be a boy. I know that I tend to get uppity about this kind of stuff, but even I had some misgivings about jumping down this sweet woman's throat. I wasn't sure how to gently remind her that colors don't define the child when her companion — a woman about my mother's age — said, " Girls can wear green, Mom." And that, was that. This woman wasn't being rude, she simply made an assumption based on a lifetime's worth of gender assumptions. I feel pretty safe saying that many 80+ people probably grew up assuming a baby's gender based off the clothes they wore. I can easily forgive Mrs. Grandma for her mistake, but that doesn't make her assumptions about my daughter and her clothes any less annoying.

To her father and I, our daughter is so obviously a girl. So, it can be confusing to us when people make the mistake. Though, to be fair, we have known her since before she was born. But the fact of the matter is, my daughter doesn't know she's a girl. She doesn't know that her sex organs are different from boys. So, when that woman misgendered her, it didn't bother me that much because, at this point in my daughter's life, I assume it doesn't bother her that much. But that experience, and so many others like it, make me wonder what makes people so sure that she is a he? Because surely if they were just guessing, there would be a 50/50 chance that they'd guess girl just as often as they guess boy. But, most of time, they don't guess girl. I'm no mathematician, but I'd say 90 percent of the time, my daughter is mistaken for a boy. And I'm quickly losing patience for that mistake.

The one indicator she does have to cue society to her gender are her clothes.

We choose gender neutral clothes now so that soon she can make the choice for herself about what she likes with a completely blank slate. Maybe she will absolutely love pink princesses dresses. Maybe she will wear blue jeans and baseball caps. Maybe she'll wear both. But whatever she wears, they will be chosen from a place of freedom of expression.

Most babies her age tend to look the same: small, short hair, pudgy wrists, and thighs. There aren't a lot of physical characteristics to denote her sex. Babies don't have facial hair. She doesn't talk much (other than "hi, hi, hi"). But even if she did, it's not like she's of an age where her voice register is low enough for people to assume she is male. But the one indicator she does have to cue society to her gender are her clothes.

I will admit that I don't dress her in bows and barrettes — she'd pull them out immediately. She doesn't wear dresses often — I can't imagine dresses are very comfortable for a baby. Her ears aren't pierced because, for us, piercing her body is a decision she gets to make for herself. And as an advocate for tights and generally anything with an elastic waist band being made acceptable in every conceivable social situation, I tend to dress her in clothes that I think would be comfortable.

I look forward to the day when my daughter can make her own wardrobe decisions, not because I find the task particularly tedious but because I have vowed to always try to provide her with as much autonomy as possible, and allowing her to choose her own clothes and not policing her choices is one way to do that. But until that day comes, we choose her wardrobe and what we choose is fairly gender neutral. We don't have a firm policy of neutrality; we just choose what we think looks cute and tend to ignore what side of the store we find it on. We're not using our daughter to make a statement about gender. It is not a scheme to fight the patriarchy or breakdown the gender binary (though, I don't think either of those things would be bad, per se).

Based on my experiences, the conclusions I've made is that the reason she is so often mistaken for a boy is because she isn't in traditionally "girly" clothing. And that really bothers me.

We simply don't want to impose our ideas of who we think our daughter should be onto her. We want her to have the freedom to express herself, to be completely who she is, from the very beginning. We choose gender neutral clothes now so that soon she can make the choice for herself about what she likes with a completely blank slate. Maybe she will absolutely love pink princesses dresses. Maybe she will wear blue jeans and baseball caps. Maybe she'll wear both. But whatever she wears, they'll be chosen from a place of freedom of expression.

There's no discernible proof that people assume my daughter is a boy because of her clothes. I don't hand out a survey after they've misgendered her, asking — on a scale of 1 to 10 — how boyish do her clothes look. But based on my experiences, the conclusions I've made is that the reason she is so often mistaken for a boy is because she isn't in traditionally "girly" clothing. And that really bothers me. Mostly because it's the 21 century and I want to know when we are going to stop telling girls (and boys) that they have to look a certain way in order to be considered one or the other? It feels like our clothing has become markers to help us feel comfortable with each other and that the markers for girls' clothes are: pink, purple, sparkly, and/or dresses. Anything outside of this seems to cause confusion.

It's frustrating, as a parent, to feel like I need to be the one to put these feminine markers on display on behalf of my daughter because I don't how my daughter will associate with them. I'm not comfortable making these assumptions for her. It's my job, as her mother, to make sure my daughter feels safe, happy (for the most part), and comfortable, especially in her own skin. It is not my job to make sure that the general public — no matter how sweet the old ladies might be — feels comfortable with how my baby's gender is represented.

The one lesson I have learned from having my daughter misgendered so often is to never assume another person's gender — no matter their age. Because, at the end of the day, their gender is not my business. So now when I meet an ambiguous looking baby (which are, again, basically all babies), I do my best to throw out the kinds of compliments that don't have anything to do with gender. Instead of "What a pretty girl!" or "You handsome man!" I say things like, "You have so many teeth!" and, "You are super awesome at walking!" Or, my old stand-by: "I like your hat." Because the act of unintentionally misgendering someone isn't problematic in itself, but the act of assuming someone's gender because of their clothing, is.