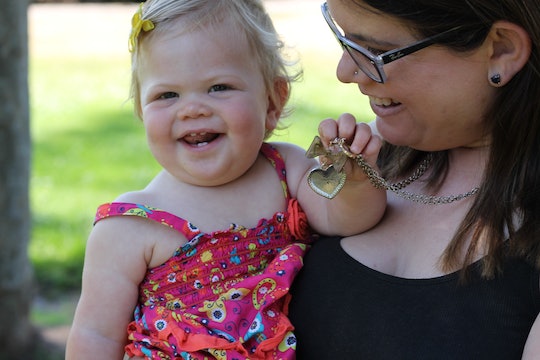 Actually, I Did Care What My Baby's Sex Was

"All that matters is that my baby is healthy." These were the words I said when I was pregnant for a second time because they felt like the right thing to say and because it seemed like the things everyone who was expecting a baby said. Except, for me, those words were a complete and total lie. In fact, I found out just how much of a lie my "all that matter is that my baby is healthy" comment was when I cried during my own gender reveal ultrasound with joy and disbelief after finding out I was expecting a girl. Having a healthy baby was by far my number one priority, but my baby's sex mattered to me. Truthfully, I cared whether I had a boy or a girl. And since I'd already had my boy, now I wanted a girl.

Admitting this feels un-politically correct for a number of reasons. Chief among them is the fact that so many people try for years to get pregnant and sometimes never succeed. So the fact that I'd gotten pregnant relatively easily both times, and that I was fortunate to have normal pregnancies, made admitting that my baby's sex mattered to me that much more difficult.

Another reason admitting I cared about my baby's sex felt wrong is that a baby's sex doesn't necessarily determine his or her gender. Sex, of course, refers to the biological differences between males and females, while gender is often defined as a person's role in society or by the way they self-identify. I could end up with a boy who identified as a girl, or vice versa. And in my internet baby and pregnancy communities, hardly anyone dared to show a preference for a boy or girl baby. I watched with morbid fascination, like observing a snake swallow a house whole, when the occasional woman dared to confess that she really hoped she was having a boy or girl.

The angry replies would pour in:

"You're lucky to have a baby at all. It took me three years to get pregnant."

"You get what you're meant to get."

"What matters is that you have a healthy baby."

I've always been close to my mom. We'd gossip and share confessions. So I wanted a little girl to share that special bond with.

The responses were even more volatile if someone with multiple children or who already had children of both sexes expressed a sex preference. Someone said, "You're so blessed to have children already. You have one of each. Why would you care whether your next baby is a boy or a girl?" But even so, I wanted to have a girl. I couldn't help myself. My truth was hard to admit even to myself, especially given the response such feelings were met with by many other mothers to be. I felt guilty having a preference, and ashamed of these feelings.

When I was pregnant with my son the first time around, I really didn't have much of a preference for whether I was having a boy or a girl. I knew I wanted to have two children, so I figured I'd think about the baby's sex the second time around. I was elated to learn I was expecting a boy. I happily folded all of the adorable baseball and animal onesies I received at my showers. I hand-painted jungle decor for my son's bedroom. I was stoked.

And I love being mom to a little boy. Although I didn't expect or raise my son to have stereotypically "boy" interests or act like a stereotypical boy, he loved superheroes and cars. He liked to talk and read and play more than he liked to cuddle. My son was, and is, super fun, funny, thoughtful, and ridiculously smart.

My son was my everything, but he wasn't my mini me.

I got pregnant with my second and last child when my son was 3. And before I found out I was pregnant, my husband and I tried to have a girl. I used ovulation detector strips to try to time our sex for just before my ovulation. Admittedly, my desire to have a girl was entirely selfish. I've always been close to my mom. We'd gossip and share confessions. So I wanted a little girl to share that special bond with. I wanted long hair to play with, and someone to dress in gaudy accessories. I wanted someone my experiences would resonate with. Someone I could offer comfort and encouragement to, because I'd "been there, done that."

My son was my everything, but he wasn't my mini me. Even as a little boy, his life experience was already very different than mine. He and my husband share a special bond, and just seem to "get" each other. I wanted the chance at that kind of connection. And even though I wanted a girl, I doubted I'd ever have one. In fact, the first few months of my pregnancy, I was absolutely convinced I was having another boy. I just felt like a boy mom. And maybe I was protecting myself from disappointment by not getting my hopes up for a girl.

Truly, the most important thing was having a healthy baby and I'd have been happy with two boys completing our family, because no matter what our baby's sex, we decided we were stopping at two kids. It felt like forever, but finally we were at the doctor's office for our ultrasound that would likely determine the baby's sex. I watched with bated breath as the ultrasound technician moved the wand over my slippery belly.

I was a woman who'd once been a girl, and being a girl felt like such a unique and special experience to me.

I asked her to say it again to be certain I'd heard her right. She was. I couldn't believe it. I broke out in an ugly cry. I was getting my girl.

Until the dam holding back my tears broke loose, I don't think I fully realized just how much I'd wanted a girl. Sure, she could be an athlete who likes to roughhouse and loves the color blue. Or she could love pink. She could be the president of the United States one day. Being a girl doesn't define who she is. But still, her sex mattered to me. It mattered because I was a woman who'd once been a girl, and being a girl felt like such a unique and special experience to me. From having girl friends, to eagerly awaiting my first period, to getting dressed up with makeup for nights out in high school, I loved being a girl and I wanted a girl to relive that journey with. A girl to bond with and swap confessions.

As a 1 year old, my daughter loves to snuggle and gravitates to dolls instead of dinosaurs. But she loves to wrestle with her brother and can hold her own. She has blond hair like my husband did when he was a baby, and she's not my mini me. But she's my we do-little girl and we do have a special bond. In the future, who knows how she'll chose to identify — or even if she'll like being feminine pronouns. But right now, she's my little girl. And that really, really matters to me. Being honest with myself that I cared what my baby's sex was was difficult, but important because it's a truth of parenting for me.

If I'd had two boys, I would've considered myself happy and fortunate. But I also would have felt disappointment and would have mourned the loss of the daughter I'd never have. And that's OK. I have my daughter, and though she's young, the experience is already every bit as fulfilling as I'd hoped. She's my girl, and that makes me so happy.