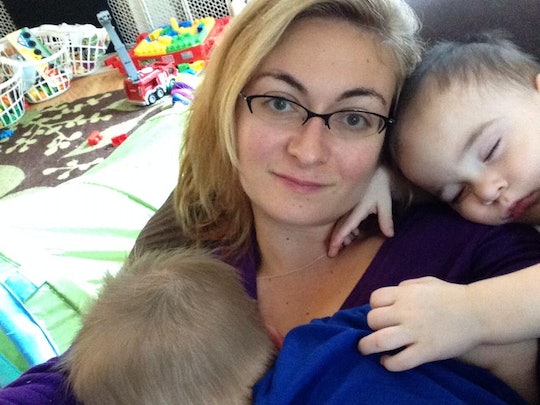 When I finally got pregnant after a pretty crappy infertility diagnosis, once people got over the shock of hearing that I was having twins, the next question they always asked was, "What are you having?" Smug pregnant woman that I was, I said what almost anyone says when asked that question: that the health of my babies was all that mattered. But declaring that what did (or didn't) lie between my future kids' legs didn't matter to me wasn't entirely honest. Truth is, it did. I said I only cared about the babies being healthy because I was absolutely positive that at least one of my fraternal twins was going to be a girl. I gave the answer everyone gives, but deep down, I wanted a baby girl.

The way I saw it, I was raised by a strong, powerful woman who had, in turn, made my sister and I into the kickass ladies we currently are. Surely all that feminist energy and refusal to take any bullshit from anyone had to be handed down to a younger generation, when it was my turn, right? Plus, I felt like it'd just be a shame not to pass these eyelashes that are so naturally thick and long to someone who would not fully appreciate them. Even when I learned that fertility issues would make getting pregnant complicated, I still thought a daughter was in my future. After all, I endured rounds of tests and daily injections with needles so large they looked like props straight off the set of American Horror Story, so surely the universe would reward me with the daughter (or daughters) I deserved.

So confident was I in the knowledge that my uterus was serving as an AirBnB to at least one little lady that when my partner and I set out to pick names before the big anatomy scan reveal, I said yes to a second boy name that I wasn't completely in love with, because I was just completely convinced we wouldn't need it.

But oh, how wrong I was.

When the ultrasound technician announced that Baby A was a boy, I was surprised, but so overwhelmed by all the other information I was hearing about his organs and brains development and counting of bones (fun fact: the baby books fail to mention how the anatomy scan is about so much more than what sex organs the baby has) that the news didn't really hit home right away. Besides, if Baby A was a boy then surely Baby B was his sister, right?

And as much of a feminist as my partner is, he'll never fully understand what it's like to be valued based on your looks by nearly every male you meet, in spite of your education or intellectual accomplishments. I wanted to explain to a little girl the awfulness that is being catcalled and teach her how to to stand up for herself, to never apologize for taking up space, being loud.

My partner, having grown up with two older sisters who had to share a single bathroom, was terrified by the thought of having two daughters. He was so happy at the news that we were having two boys that he was practically tap dancing in the exam room. I didn't really feel anything in the moment other than dizzy from laying on my back for so long. It was only after I sat up after scan was over and realized my ears were ringing and heart was racing that I realized what the tech had said: Baby A and B were both boys. Not only was everything not going to plan, but now I had to come to terms with the knowledge that my home was about to be invaded by a plethora of penises. Peni? Weenies? I suddenly wished fervently that I'd adopted the girl cat.

I loved my sons immediately and intensely, even if there was a tiny part of me that thought about how awesome it would be to one day have not one but two big brothers to look out for a little sister. But another pregnancy was only a daydream. My pregnancy with the twins got scary right around week 27, and after almost two months of bed rest and a terrifying brush with cholestasis, my sons were born almost two months before their due date. Even though we had plenty of embryos on ice from our round of IVF, I knew another pregnancy wouldn't be in the cards for us. Not just because of the potential risks on my own health or that of a fetus, but because I owed it to my sons to do what I could to be here for them for as long as possible.

I didn't want a daughter because I'm a girly girl who wanted a mini-me to go shopping with. I don't regularly get my nails done and frequently forget to shave my legs. I love makeup, but most days I don't bother to put any on. I have no idea what's in fashion and the closest I'll come to wearing any sort of pattern is a horizontal stripe, but only in one color. My go-to look is "on my way to or from the gym" and I've actually fallen flat on my face in front of a large crowd of people during a rare and disastrous attempt at wearing heels at work. I wasn't hoping for a daughter to play dress up with.

I love my sons deeply and beyond measure, but I'd be lying if I said I don't ever mourn the fact that I don't have a daughter.

And I didn't view having a little girl as a chance for a do-over. I've seen plenty of women push their kids towards the things they wish they had done as a child, but that didn't interest me. I had no desire to fix my perceived adolescence missteps through a daughter by forcing her into sports and activities I regret not pursuing (though I did harbor secret dreams of teaching her the dance to "Bye, Bye, Bye" and perhaps using the sure-to-go-viral video as a springboard to meeting Ellen).

Instead, I wanted a daughter so that I could hopefully share the same amazing relationship with her that I have with my own mom. My mom always understands exactly where I'm coming from and sees the world the same way I do, and I was really looking forward to having that same type of unconditional love and bond with my own daughter. And as much of a feminist as my partner is, he'll never fully understand what it's like to be valued based on your looks by nearly every male you meet, in spite of your education or intellectual accomplishments. I wanted to explain to a little girl the awfulness that is being catcalled and teach her how to to stand up for herself, to never apologize for taking up space, being loud, being heard.

Many of these same feminist messages I can and do plan to pass onto my sons. They're only 3 but I'm laying the groundwork to raise them to be men I'll be proud of. Though I don't yet know how my sons will identify in the future, right now, it's just me in a house full of boys. If they both identify as heterosexual cisgender men as they grow older, there will be no shopping for a first bra in my future, no offering to make her chocolate cookies in an effort to make her PMS suck less, no dealing with rolled eyes and slammed doors as she tells me how much I'm ruining her life (OK fine, maybe I'm dodging a bullet on that one). I love my sons deeply and beyond measure, but I'd be lying if I said I don't ever mourn the fact that I don't have a daughter.

I feel lucky to be raising kids in a generation where gender roles aren't as strictly defined as they were in the past. As much as I like playing with Matchbox Cars, it's nice that I can share some of the things I love with my boys as well, like baking and crafting, and be proud of it. We're even slowly working on our N'Sync moves, and fingers crossed that they just may be camera ready in another month or two. But even though I love my kids and would never want to replace them, there's still a tiny part of me that will always wonder how things would be different if I had a daughter, too.