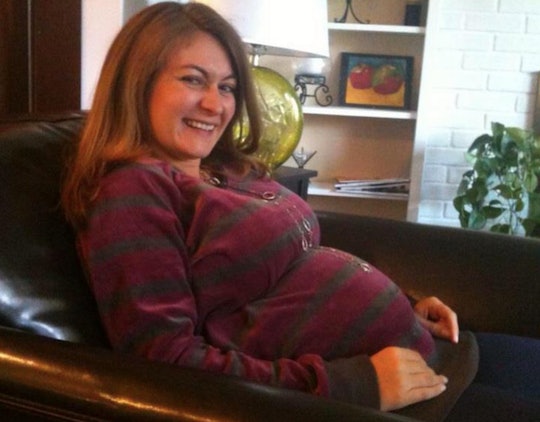 What Being On Bed Rest At 27 Weeks Pregnant Was Like

When I first found out I was expecting twins, my doctor warned me that even though I was healthy, carrying two babies is no easy task. He told me given my height and smallish statute, it was not only likely that I would deliver my babies early, but also that I could end up on bed rest towards the end of my pregnancy. I brushed off his words at the time. I was only five weeks pregnant and still giddy from the double success of my IVF. I was working out five times a week and felt amazing, and I was sure I could maintain my energy until I popped out my babies and got back to the gym.

Then first trimester morning sickness and exhaustion set in. I went from daily three-mile walks to being so tired after work that I would flop down on the couch and tell my husband with all seriousness that if a fire broke out he’d have to carry me because I didn’t even have the energy to lift my arms.

As I entered my second trimester and regained my appetite, I was able to get back to the gym a bit, but it was clear my body was working hard at growing these two little boys. Everything took more time and energy: rolling myself out of bed, bending down to tie my shoes, even eating a snack could make me sweat because there was so much pressure on my stomach and lungs from the babies being squished in there. Each week, as I started to waddle a bit more and found myself too out of breathe to take the stairs at work, I began to daydream about what it would be like to be put on bed rest.

Six weeks before Christmas and mere days after my baby shower, my OB gave me the order I thought I had been waiting for. I was 27 weeks pregnant and at my weekly Thursday check-up. During my typically routine ultrasound, the technician discovered my cervix had pulled an Elvis and left the building. I was shocked because even though I knew this was a possibility, aside from being tired and feeling a bit like an overstuffed sausage casing, I felt fine. I was still doing prenatal yoga, I had very little cramping, and no contractions.

Still, when you have practically no cervix left at 27 weeks, the doctors don’t mess around. My OB told me to go home, get comfortable, and to come back on Monday to make sure I wasn’t going into premature labor. He said if things looked good we could talk about me going back to my job as a courtroom clerk, since I was able to sit most of the day.

I went to work and told them the news, and my colleagues were very supportive and told me to take whatever time I needed. I called my husband, who felt awful for missing the appointment and promised to bring home ice cream to atone. (I know, you guys.) Then I headed home to my comfy pants, excited to have an excuse to enjoy a long weekend of being lazy and eating in bed. I thought I would recharge my batteries and be back to work in less than a week.

That weekend was everything I’d ever dreamed bed rest would be. It was just like staying home sick, just without the snot and all of the Netflix. I watched a ton of television, read a book and even knitted a couple of tiny, adorable hats all while lying on my left side, the optimal position for getting blood to flow directly to the babies. It was bliss in a bed, but I was ready to get back to the real world, expecting to receive the all-clear from my doctor that Monday.

But when I went into the doctor after my weekend impersonating Jabba the Hut, there was more bad news: I was a teeny bit dilated, and had to go straight to the hospital in hopes of stopping my body from progressing into full-on labor.

The next few days were a blur. I remember getting giant steroid shots in my hip to develop the babies’ lungs in case they were born prematurely. They gave me an IV of a medication called Magnesium Sulfate which made my entire body feel like it was covered in flames, and I made the nurses laugh because whenever they asked me how I was feeling I started to sing Alicia Keys. They sent NICU doctors to my room with grim pictures and statistics to tell me what my babies would look like if they were born now, along with potential health complications and survival rates that did not make me feel hopeful. When I made it to 28 weeks, my doctors gave me great news: The twins were still camped out in my abdomen and looked like they would be staying there for a while, and I would be staying in the hospital until the babies were born.

I didn’t realize how truly isolated I felt until one day when wheeled me out of the room for an ultrasound and I cried in the hallway and the elevator because it was so nice to have a different view, even if I did still have to lay down to see it. In hindsight, I realize the whole floor was filled with beached pregnant women like myself, and I should have saved my fruit cups and tried to make some tin telephones to phone the woman in the next room.

My doctors knew that my birthday was Dec. 12 because I enthusiastically told them every morning when I saw them that all I wanted for my special day was to be allowed to go home. By this point, the boys were perfectly secure in my tummy and they were hopeful I could make it close to my early March due date if I just stayed in bed. But because there was no one at home to drive me to the hospital in case I did have to get there, plus we were having a lot of big snow storms, they felt the safer course of action would be to keep me in the hospital. So there I was, on my 29 birthday, lying in bed eating grapes and feeling nothing like Cleopatra.

The week before Christmas my husband finished his semester as a college professor. Since he didn’t have to go back to work until mid-January and could be home in case I needed him, I was finally sprung and went home to finish my sentence there. It was the closest thing I’ve ever experienced to a Christmas miracle.

Everything was better once I was able to go home (except for the cooking -- being able to order warm chocolate chip cookies on demand in the hospital was kind of amazing). Sure, I was still in pain and couldn’t sleep, but at least I had my husband and my cat to keep me company. Plus, I got to leave the house once a week for my weekly check-up and was able to spend that whole day downstairs admiring the tree from the couch before pulling a Rapunzel and going back into my tower.

I spent seven long weeks on bed rest before my babies were born in mid-January at just 33 weeks. While I would absolutely do it all over again to keep them healthy, being on bed rest made me appreciate having a healthy and mobile body. It was nothing like being at the spa or having a lazy Saturday. Even on the days when my kids were infants, and I was barely sleeping and exhausted, I still wouldn’t ever wish for another day of bed rest.