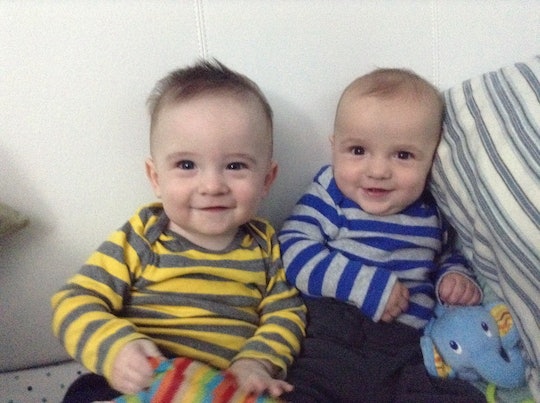 I Didn't "Cheat" By Using IVF To Get Pregnant

Having twins makes you a mini-celebrity, whether you want it to or not. A double stroller complete with two kids who look similar in age and are dressed alike tends to attract baby fans like an ice cream truck draws kids during the summer. Unless one or both of my boys is mid-meltdown, I usually don't mind answering the same questions and hearing the same comments over and over — save one. People love to ask if my kids are identical, which one was born first, how long was I in labor for, did I have a c-section, how old they are, and which one is the shy one (No; Remy; eight hours; yes, emergency style; two going on 13; and whichever one isn't making eye contact at the moment). They often comment on how each twin has a different eye color and that one favors his father while the other shares my golden highlights that I neglect to mention come courtesy of my favorite stylist.

I grit my teeth when strangers use the overused and offensive term "double trouble," and even manage not to outwardly roll my eyes when they tell me I've "got my hands full," thereby implying that my children are ill-behaved and I'm sucking at being a parent. But the comment that really gets under my skin is when someone tells me I "cheated" my way into pregnancy by using in vitro fertilization, or IVF.

My body had failed at being a woman by being unable to reproduce on its own.

With the exception of the woman in the locker room at the gym who demanded I tell her exactly how much weight I had gained while pregnant, being called a cheater for using IVF is the rudest and meanest thing I've encountered since becoming a mom. Unless you're having trouble conceiving and are looking for some advice or just a shoulder to lean on, the specifics of my kids' conception is really no one's business, and yet, I'm asked time and time again by strangers I've just met if my twins are "natural." When I truthfully say that they are not, people love to say I "cheated" or that my twins aren't "real."

I could lie and say there are twins in my family, since my step-dad's brothers are twins. Or I could fire back and say it's none of their business, but I don't, for one important reason: my kids. When they were tiny, I had no problems lying when strangers asked about their conception, but now that they're old enough to comprehend conversations and interpret emotions, it's important to me that they don't grow up feeling any sort of shame over their origins. Lying might make them feel like there's some reason why I'm concealing the information that has to do with them instead of the nosy person asking.

When doctors first told me that there was no way I could conceive without significant help from modern medicine, I felt ashamed. There was a sense that my body had failed at being a woman by being unable to reproduce on its own. It's taken me time to come to terms with my faulty reproductive parts, and to see that using advanced reproductive technology is no different than having a breast augmentation. If the technology exists and it has the power to make you happier, then why not use it?

I don't want my kids to feel badly about how they got into my tummy, and I feel strongly that the more women talk about their experiences with infertility, the less alone women currently struggling with it will feel. For these reasons, I tell the truth when asked about how I got pregnant. I feel like my attempts at being a decent human being are rewarded by being called a cheat.

I never quite know how to react when someone tells me that, by virtue of their time in a test tube, my boys are somehow not "real" twins. Frankly, if there is something that separates them from their peers and makes them "other," I'd love to know.

Is paying for IVF like buying a car? Are their options or special features I could have purchased, because as cute as they are when they sing, I'd love a mute button somewhere on the back of their heads I could activate the next time they decide 4 a.m. is a perfectly acceptable time for a rousing chorus of "The Wheels on the Bus." Do they have special powers like twins in a scary movie? Can I somehow leverage these supernatural skills into a chance to meet Oprah?

Not only does undergoing IVF not make me a cheater when it comes to getting pregnant, there are plenty of reasons why IVF is actually harder than conceiving without a boost from science. Undergoing a round of IVF is no easy task. It's not like the doctor's office is filled with newborns in a display case and you point to the one you'd like and it's gift-wrapped and placed in your stomach on layaway for 10 months.

There are so many different paths to becoming a parent that it seems petty and pointless to try and rate one against another.

IVF requires a significant time commitment, the willingness to plan your schedule around when you have to administer medications that need to be timed precisely, hours upon hours logged in doctor's offices, invasive medical procedures, a significant chunk of cash, and perhaps most sobering of all, the very real chance that in spite of all this, you won't get pregnant. Getting pregnant naturally requires lying down in the privacy of your own bedroom and risking the possibility of having an orgasm.

But please, tell me again how I took the easy way out.

Even if using IVF was somehow the equivalent to pulling Queen Frostine's card on my first turn in a game of Candy Land, once the boys took root in my uterus, I still had to experience pregnancy just like anyone else, which was kind of the point. Getting to experience pregnancy and labor was a big reason why I chose to pursue advanced reproductive technology over adoption as my path to parenthood. The way I conceived may be non-traditional, but morning sickness, stretch marks, and contractions feel the same no matter how you come to be pregnant.

There are so many different paths to becoming a parent that it seems petty and pointless to try and rate one against another. Parents who conceive naturally won't automatically be a "better" parent than someone who uses advanced reproductive technology, a surrogate, or adoption. Just like the non-existent distinction between moms who have vaginal births and those who have c-sections, at the end of the day what matters is that we all have the same goal: to raise a child that won't grow up to be a jerk.

Struggling with infertility made me feel cheated. I had to confront the unfair truth that no matter how badly I wanted to, my body did not give me the opportunity to experience pregnancy and labor on my own. But using science to help me achieve my dream hasn't made me a cheater. It's made me a mom.