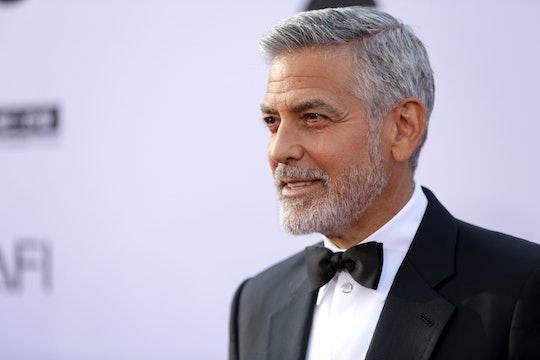 Even before she announced she was expecting, Meghan Markle has been struggling with aggressive and sometimes even hostile media attention. After watching her being "pursued and vilified" by the paparazzi, according to People, George Clooney compared Meghan Markle to Princess Diana for this heartbreaking and poignant reason. Many have blamed the obsessive paparazzi for causing — and profiting from — Diana's tragic death, Clooney among them.

Clooney spoke about the media's coverage of Markle while promoting his upcoming Hulu series, Catch-22, as People reported. Referencing the way Markle has been treated since becoming connected with the royal family, Clooney told reporters at a press panel, “They’re just chasing Meghan Markle everywhere, she’s been pursued and vilified."

He went on to compare Markle to the late Princess Diana, according to Australia’s Who magazine. “She’s a woman who is seven months pregnant and she has been pursued and vilified and chased in the same way that Diana was and it’s history repeating itself,” he said.

Clooney added, “We’ve seen how that ends,” in reference to Princess Diana's 1997 car crash in Paris that claimed her life. Diana was reportedly being chased by paparazzi at the time of the crash, one of whom photographed her as she passed away, according to The Sun.

Markle has endured more than her fair share of negative media coverage. Before she and Prince Harry were even engaged, Harry condemned the media for focusing on her "mixed-race heritage," calling out the blatant racism found within the articles. And since announcing she's expecting, the attacks by the media have only gotten worse. From articles shaming her for her bump size, to criticism on how often she cradled her growing belly, Markle has been constantly under attack. Additionally, many outlets fueled rumors of strife within the royal family, specifically between Markle and Kate Middleton. I can only imagine that the coverage would become difficult to bear at some point.

Clooney isn't the only one jumping to Markle's defense in the face of so much media scrutiny. Five of her close friends, who chose to remain anonymous to protect their identities as well as those of their loved ones, recently told People that Markle has "silently sat back and endured the lies and untruths.”

One of the women told People that the duchess' close friends and family “worry about what this is doing to her and the baby." She added, “It’s wrong to put anyone under this level of emotional trauma, let alone when they’re pregnant.”

Another unnamed confidant of Markle's said that she recently spent a few days with Markle when Harry was out of the house for work and despite the constant attack from the press, Markle is adjusting well to married life in the royal family and staying true to herself, as Refinery 29 reported:

As refreshing as it may be to hear that Markle is persisting, Clooney is right to call out the unfair portrayals of her that have appeared in the media. Thankfully, she seems to have quite the support system to back her up.