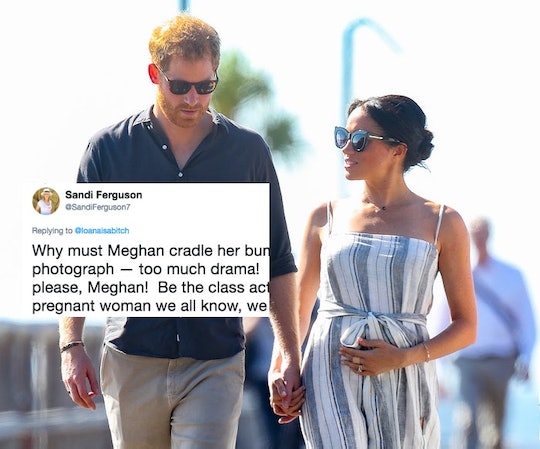 Touching your baby through your belly is the closest an expectant mother can come to holding her unborn child. But, apparently, doing so is... frowned upon? Yes, you read that right. People are shaming Meghan Markle for cradling her bump on stage at an awards show and they appear to be dead serious in doing so.

Markle, who is expecting her first child with husband Prince Harry this spring, made a surprise appearance on Monday at The Fashion Awards in London with her bump in tow. She was there to present the award for Designer of the Year to her friend and wedding dress designer Clare Waight Keller, the Givenchy designer, according to CNN. During Markle's touching speech about the importance of fashion and female solidarity, her hands often traveled to her growing bump. She cradled, patted, and rubbed it affectionately — as pregnant women are known to do.

Despite the heartfelt and harmless nature of Markle's gesture, internet trolls were somehow riled up by her touching of her own stomach. Her critics called it overly posed and smug — um, okay. They also compared Markle to Demi Moore, who famously held her own bump in a nude photo shoot. And while it should go without saying that a pregnant woman should be free to cradle her bump however and whenever she pleases, Khloé Kardashian did say it when similar haters came at her and I will, too.

While some people on Twitter claimed that Markle is somehow faking her pregnancy and only holding her bump to convince people it is real, others think she's just "bizarre." One user pointed out that Duchess Catherine "never" held her bump, because that's common knowledge.

While I love a good conspiracy theory as much as the next gal, a pregnant woman touching her belly doesn't quite inspire me to shout, "Stop faking it!"

Others wondered if she thought the baby would "fall out" or need to be held up. When I was pregnant with my daughter, I almost always had my hands on my belly. Aside from the amazing sensation of feeling her kicks from the outside, I also just loved knowing that she was on the other side of my palms. It became second nature to pat, rub, or cradle my belly. Little did I know, I was being ridiculously dramatic and downright awful. My bad, guys.

The complaints about Markle's belly just kept on coming. Several users decided to tweet their thoughts straight to the Kensington Palace official Twitter page. "Can someone tell Meghan Markle how to be pregnant please? While they're at it, maybe they could tell her how to be a Royal?" one person wrote. "Not just me. Look at the comments from other outlets. Its [sic] embarrassing. Classless to do that while [a] designer [is] accepting [an] award." I'm sure Kensington Palace will get right back to you on that one, friend.

Aside from the right to do whatever she damn well pleases, Markle has science on her side when it comes to cradling her bump. Numerous studies have shown that babies like it when their moms touch their bumps. A 2015 study from Dundee University in Scotland looked at pregnant women in their second and third trimesters, and they found that out of three activities performed while pregnant — reading aloud, stroking their bellies, and lying still — babies were most active when their moms were touching their bellies, according to TIME. Another study found that babies respond more when their moms touch their bumps, as opposed to fathers and random strangers, as What to Expect reported.

But as interesting and insightful as these studies may be, there is no argument for Markle touching her belly that is stronger than the fact that it is simply no one's business how she enjoys her pregnancy. Here's hoping Markle takes the same attitude as Khloé Kardashian and says, "I will touch my bump and love my bump as often as I choose."