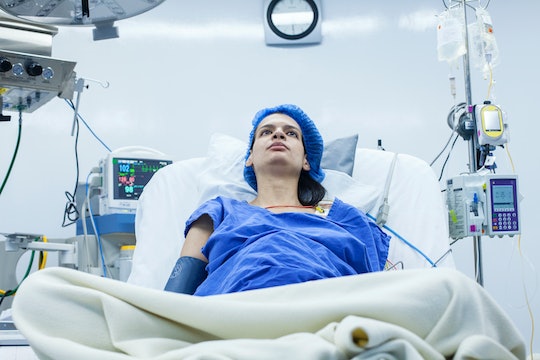 Worried About Puking While Getting An Epidural (Eek)? Here's What You Should Know

No one plans on vomiting during labor. No, most of us like to picture ourselves with our hair in a messy but becoming top knot, waterproof mascara applied, with perhaps a slight sweaty sheen (i.e glow) to our cheeks. But the truth? Some of us may hurl. And getting an epidural if you're vomiting honestly doesn't sound like it would be all that great.

I'm not talking about vomiting that is brought on by the epidural itself. (This happens when an epidural causes hypotension, which is a sudden drop in blood pressure, and which can lead to barfing.) What I'm referring to is if you're already regurgitating before the epidural needle even makes it into the room.

As explained in Parents, there are different reasons women sometimes vomit during labor. You may simply still have food sitting in your stomach. And as digestion slows to a crawl during labor, those tacos might be like, "Oh, I see now isn't a great time to go out the usual exit. Guess we'll just go back the way we came in..." Or, it could simply be that the pain you are experiencing is so intense, you throw up. Lovely, I know.

An epidural, of course, exists to help manage this pain. A needle is injected into the lumbar area, and the anesthesia then stops pain signals from traveling from the spine to the brain. While a needle in the spine can sound a little scary, a lot of women say "Awesome, sign me up!" for the epidural. And while there is a myth that there is a "certain window" in which a woman can safely get an epidural, Northwestern Medicine debunks this, and says the only trick with an epidural is that a woman has to be able to hold still long enough for it to be inserted safely.

Therein lies the rub. I mean I don't know how you vomit. But I personally am not able to vomit whilst remaining motionless — the puke arcing gracefully out of my mouth a la a Roman fountain. Vomiting, for most of us, tends to make the body lurch and spasm in totally involuntary ways. So then what? Well, the answer is actually quite simple: meds.

Dr. Jennifer Butt is an obstetrician with Upper East Side Obstetrics and Gynecology, and she said that yes, while vomiting can occur during labor, it is actually pretty uncommon. And if it does happen, antiemetics can be given prior to the epidural, which will get the yacking under control. (Antiemetics are drugs that curtail puking. It's the stuff many of us take for motion sickness.)

Dr. Butt also emphasizes that the amount of time needed to get an epidural is in fact minimal: "There is a very short period of time that the patient will need to be still while the anesthesiologist places the epidural, to ensure safety and effectiveness."

So, if you have been harboring nightmares of barfing all over the delivery room like a scene from The Exorcist - Maternity Ward, with the anesthesiologist just shrugging and walking out, well madam, you can put those fears to rest.