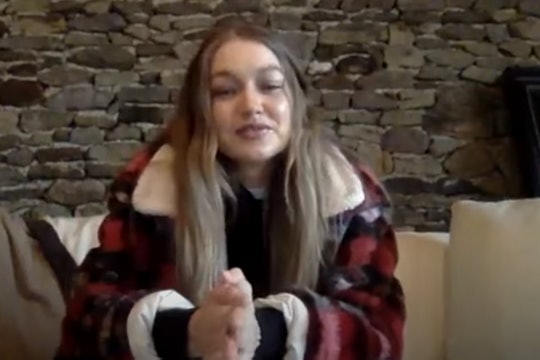 It's Official! Gigi Hadid Confirmed She & Zayn Malik Have A Baby On The Way

It's all true, folks. In a new interview with Jimmy Fallon on The Tonight Show, Gigi Hadid confirmed she's indeed pregnant and expecting her first child with her boyfriend, former One Direction member Zayn Malik. And what's more, she even revealed the food she's been craving most while expecting.

Earlier this week, TMZ reported that the 25-year-old model and Malik are expecting their first child together, but neither of the expectant parents confirmed the rumors at first. A few days later, however, Hadid decided to go public with her exciting news during a Skype interview with Fallon, telling the talk show host that while "obviously we wished we could have announced it on our own terms," the couple are "very excited and happy for everyone's well wishes and support."

Hadid looked ecstatic to share her news and said they she's staying positive about the unique struggles of being pregnant while social distancing. She told Fallon that "especially during this time, it's a nice silver lining to be home together and experience it day by day." Of course, a little comfort food helps out when you're pregnant, and Hadid admitted that she is all about one specific craving these days. "My craving has been everything bagels," she said, adding that she's been eating a bagel a day, proving no one is safe from pregnancy cravings.

Hadid apparently loves everything bagels, which are basically plain bagels with the addition of sesame, poppy, and caraway seeds, pretzel salt, onion, and garlic, so much that her birthday cake for her recent 25th birthday was a giant everything bagel-themed cake made by the Cake Boss, as she wrote in her birthday post.

Hadid's cake was actually a marble cake made to look like an everything bagel, but she seemed pretty happy about it nonetheless. She celebrated her big day social distancing with Malik and her family at their farm in Pennsylvania.

The model opened up about her future desire to have kids in February in an interview with i-D magazine, saying "I think that as I get older... well one day I’ll start a family and I don’t know if I will always be modeling." Little did she know that "one day" was just a few months away.