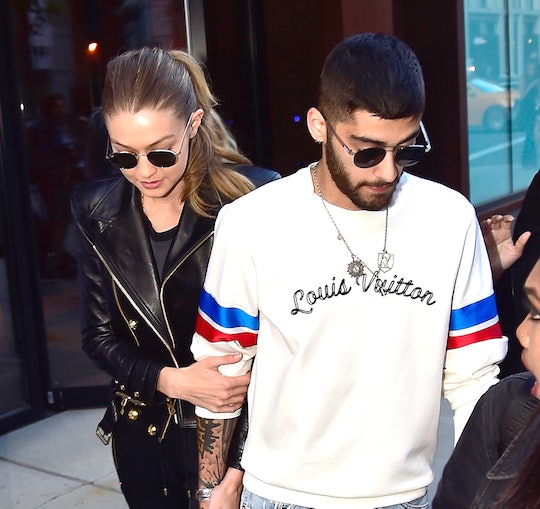 Well it sure sounds like those exciting rumors are true after Gigi Hadid's mom basically confirmed her pregnancy news. While speaking with Dutch news outlet RTL Boulevard this week, the 25-year-old model's mother, Yolanda Hadid, said she was "shocked our little secret got leaked to the press."

Earlier this week, TMZ reported that Hadid and her longtime boyfriend, musician Zayn Malik, are expecting their first child together. Neither Hadid nor Malik confirmed the report and Romper's requests for comment were not immediately returned, although an unnamed source told Entertainment Tonight on Tuesday that the couple was "very excited" to become parents for the first time.

"Gigi has kept the secret close to her family and friends for a while, as she’s only a few months along," the source told Entertainment Tonight. "Once Gigi and Zayn got back together at the end of last year, it was like they never skipped a beat and knew what they had was special. The couple and their families are overjoyed."

While speculation has been all over social media, there was no official word until Thursday when Hadid's mother told Dutch news outlet RTL Boulevard that she was "still shocked our little secret got leaked to the press."

"Of course we are so excited," she said. "I’m excited to become Oma in September, especially after I lost my mom so recently. But this is the beauty of life, one soul leaves us, and a new one comes in. We feel very blessed." Oma is German for "granny."

While Hadid and Malik have yet to comment on the reports yet, several news sources like TMZ have reported that they're expecting a little girl. Another unnamed source who claimed to be close to the couple told Entertainment Tonight that they are expecting a girl and are apparently "over the moon" about the news. "At the end of the day it didn’t matter to the couple what the sex was, but now they can prepare for the new addition before she arrives," the source said.

The expectant mom's father Mohamed Hadid was asked about the news that his daughter was pregnant during an interview with Al Jadeed TV on Wednesday and did not confirm the news either way, saying instead, per Us Weekly: "Let me digest it and talk to her first, ‘cause I’m not sure if it’s real or not. If she is, I’ll be very happy just as long as the baby is healthy and she’s healthy. That’s all I care [about]. I’ll be very proud of her if she has one."

Now that Yolanda Hadid has confirmed the exciting news, everyone can officially start imagining just how beautiful that little one is going to be.