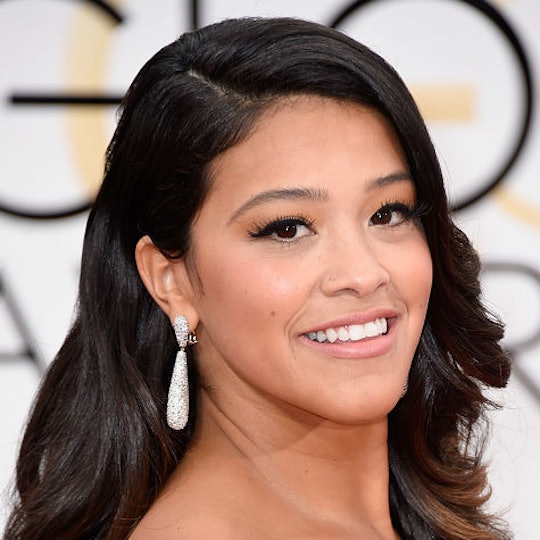 Awards show season may have just begun, but Gina Rodriguez’s 2016 Golden Globes outfit will be a difficult look for other celebrities to beat. Rodriguez, who was nominated for Best Performance By An Actress In A Television Series — Musical or Comedy, stepped onto the red carpet wearing a Zac Posen navy blue ball gown. Though the dress was enough to make jaws drop, Rodriguez took it to the next level by adding some stunning accessories. The diamond bangles and teardrop earrings complimented the gown perfectly, adding to the simplicity of her look.

Rodriguez’s 2016 Golden Globes outfit is very similar to the dress she wore to the 2015 award show, where she was a first-time nominee and winner for Best Performance By An Actress In A Television Series — Musical or Comedy. There was an understated elegance to her outfit, which consisted of a beautiful black Badgley Mischka mermaid gown and diamond teardrop earrings. And though one would think a simple dress would be easy to find. Rodriguez told E! that she “tried on 7,000 dresses” before choosing the Mischka gown. This time, however, finding a dress was a little easier. In an interview with Yahoo, Rodrigues revealed that Zac Posen design her Golden Globes dress, and said trying it on felt like putting on a wedding dress.

“It’s so elegant,” she said. “So regal. Zac Posen has been so supportive of me. They reached out and I fell in love. I’ve always been in love with Zac and when they were like ‘We want to dress you’ I was like ‘What? Me?’ It’s pretty remarkable.”

It also seems that Rodriguez was a little more relaxed this time around, and even shared her preparations for the night on Twitter. Hours before arriving on the red carpet, Rodriguez posted a photo of herself getting ready with her best friends on Twitter. Sounds like my kind of pre-game.

Although Rodriguez could have taken more risk during her second appearance at the Golden Globes, it was great that she stayed true to her style — simple, but oh so sexy.

Perhaps Rodriguez’s red carpet win will be rewarded with a Golden Globe win as well.