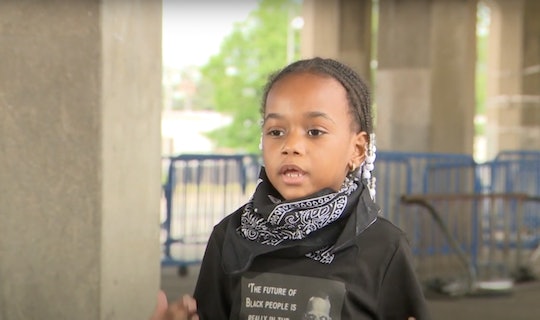 Black Lives Matter protests have erupted in all 50 states across the country and even abroad, but one little girl passionately chanting "No Justice, No Peace" while marching with her mom has gone especially viral.

Earlier this week, Long Island Herald executive editor Scott Brinton shared a video of 7-year-old Wynta-Amor Rogers joining fellow protesters in Merrick, New York. The little girl, who lives in nearby Uniondale, was confidently walking down the street with a face mask pulled down from her face, chanting the words "No justice! No peace!" with serious intensity. Raising her fist at the camera and emphatically waving her arms in the air to get her point across.

Brinton's video has been viewed more than 20 million times on Twitter and has been shared by celebrities like Mark Hamill, who posted the video to his Instagram page with the caption, "You better believe the children are our future... & our future is F-I-E-R-C-E! Ladies and gentlemen. ⁣⁣Meet our fearless leader. She will guide us to a better future! I need her leading EVERY march!⁣" Sen. Kamala Harris also tweeted about the little girl, saying "Wynta-Amor gives me hope. Thank you both for everything that you’re doing. We’re in this fight together."

Wynta-Amor's mom, Lakyia Jackson, told Newsday in an interview that she wasn't sure if she would take her daughter to the protests on Long Island but the little girl insisted. "She was like, 'No, mommy, I want to go,'" Jackson told Newsday.

As for Wynta-Amor herself, she had no problem explaining her reasons for wanting to join the protest with her mom. "I just want everybody to get along," the 7-year-old told Newsday. "I want us to be a good New York community. If we get through with this, we can fight this, you know? And we can come into a big group in one piece — just one piece."

Millions of people across the country are protesting systemic racism and police brutality after the death of George Floyd, a Black man who died in police custody after a white police officer knelt on his neck for more than eight minutes. Officer Derek Chauvin, the officer seen kneeling on Floyd's neck, was charged with second-degree murder and second-degree manslaughter, while three other officers, Thomas Lane and J. Alexander Kueng, and Tou Thao, involved in his arrest were charged with aiding and abetting second-degree manslaughter, according to CNN.

As for Wynta-Amor, she told Newsday she was "marching because I want Black people and white people to be together." "For my message for people, I just want God to be strong," she said. "We can get through this."

On Twitter, Jackson addressed her daughter's viral video and thanked people for their support. "We appreciate it so much," she tweeted. "Wynta-Amor wanted to be heard and she has been. We must show the kids of the world the right way and I will start with mine."