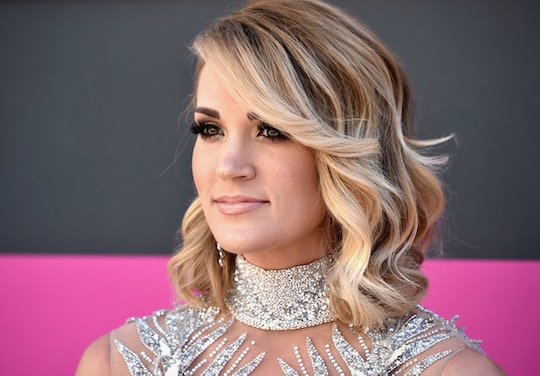 Carrie Underwood deeply understands what it is to be born with a special skill set. The Grammy award-winning singer has a seriously solid career behind her already, winning American Idol initially and then going on to establish herself as one of the premier country singers in America. So it's no wonder she recognized a pretty special talent in another little girl she recently met. Savannah Dahan, a hearing impaired 8-year-old girl stunned Underwood with her sign language rendition of the song "The Champion." You genuinely have to see this to believe it.

Little Savannah went viral earlier this year when her version of Underwood's song with Ludacris, "The Champion," was shared in a video all over the internet. The 8-year-old girl delivered a pitch perfect American Sign Language (ASL) version of the song, hitting every one of Underwood's notes at exactly the right moment and amazing thousands of people on YouTube.

Savannah was born hearing impaired and her entire family, according to Good Morning America, including two younger sisters and both parents, are also hearing impaired, so the fact that she was able to stay so perfectly in time with every note Underwood sang was seriously impressive. So impressive, in fact, that Savannah was able to meet Underwood in Washington, D.C. during her Cry Pretty tour to actually perform with her, according to People.

On Sunday, Underwood took to Instagram to share the priceless moment when the two performers met and created a gorgeous rendition of "The Champion," with the singer doing it a capella and Savannah signing the entire song.

Get ready to be amazed.

Underwood, who never took her eyes off the little girl throughout their duet, captioned the video: "Savannah! You bring so much joy to #TheChampion! Thank you for such a special moment last night in D.C." And that is the perfect word for what Savannah's performance evokes: Joy.

Social media users took to Underwood's Instagram comment section to let Savannah know just how amazing they thought she was. "This kid is impressive," one follower commented. Another wrote, "Omg, Carrie!! You’re so amazing!! That little girl is a champ!!"

For her part, Savannah could not have been more excited to perform with Underwood. As the little girl told Good Morning America, she is her favorite singer: "I love her songs because it is easy to understand and her expressions are clear."

Her father Richard Dahan said that his daughter has a particular affinity for "The Champion." According to People, he said: "She really identifies with that song. She’s read the lyrics and she and my wife, they’re always reading and signing the songs together. We really didn’t realize the skill she had until we saw the TV behind her with the captions and she was really able to identify with the words."

Underwood, who is herself a mom to two little boys, clearly identifies with Savannah as well. She seems to recognize a pretty special talent in the little girl, something unique and precious that needs to be fostered and encouraged to grow. And I suspect performing with the Carrie Underwood when she's just 8 years old will go a long way to encouraging her to cultivate her talent.