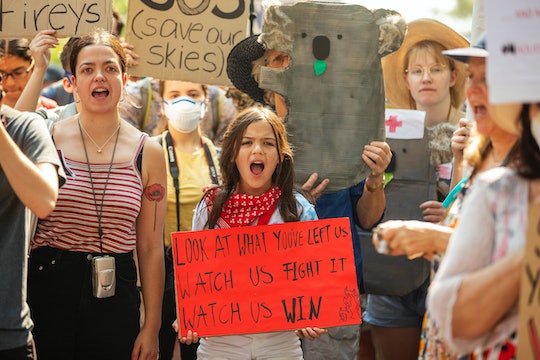 In the midst of a peaceful protest outside the home of Australian Prime Minister Scott Morrison, a young girl who lost her own home in the Australia bushfires was threatened with arrest by police if she didn't follow orders. A video of the interaction has since gone viral, with many commending the young activist's bravery and courage.

Footage of the protest, which was happening outside Morrison's home official home of Kirribilli House on Thursday, was shared on Twitter by journalism student River McCrossen. In the video, a 13-year-old girl known as Izzy was attending a protest with her father to raise awareness about climate change and the horrific Sydney bushfires that took her home. Izzy and her father were approached by police officers who can be heard saying to her that she needs to understand "force may be used" if protesters don't comply with directions to leave the premises.

Bushfires in Australia have been raging since September, destroying 700 homes and killing six people, according to The Telegraph. In November, New South Wales, the largest state in the country, issued a state of emergency as the fires show no signs of abating, NPR reported. And yet police appeared to be especially concerned with moving protesters away from the Prime Minister's house.

In the video, an officer can be seen crouched down in front of Izzy, who looked shaken and frightened, explaining that she had to leave. He explained that if they did not move along, force might become necessary. "I warn you that should you fail to comply with my direction, you may be arrested. Force may be used," the officer said.

Izzy then quietly said she understood and walked away with her father. Prime Minister Morrison was reportedly not even in the house on the day of the protest, according to the BBC, as he was on holiday in Hawaii, which was actually why people like young Izzy were there protesting in the first place. The young girl held a sign that read, "Look at what you've left us. Watch us fight it, watch us win."

In a separate video posted to School Strike Climate Change, Izzy is visibly shaken and explains to a reporter that "it's just frustrating, we weren't doing anything wrong."

She's right. Of course, she's right. As she and her father made the brave choice to show up to bring awareness to the bushfires, they are currently homeless. Think about that for a minute. A young girl whose house burned down had the courage and intelligence to direct her energy towards being a force for good. No, she wasn't doing anything wrong — she was doing everything right.