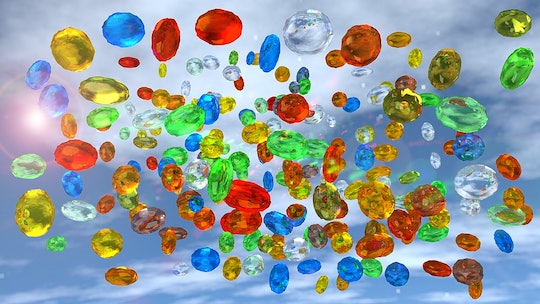 It must have been a terrifying moment for both 7-year-old Gianessa Wride and her mother, Daniella Wride; in January, Gianessa's hair started to fall out. Her mother was brushing her hair before she went to bed, and noticed a big chunk had come out. Within one month, all of the little girl's hair was gone. But that didn't stop this girl with alopecia from winning "Crazy Hair Day" at school. Sometimes a little creativity and a lot of courage go a long way.

At first, both mother and daughter were devastated when Gianessa started to lose her hair; as Wride told ABC News:

I started to brush it, and there was a lot of hair coming out with the brush.

By the time they visited the dermatologist, all of her hair was gone, and they were given the diagnosis of alopecia, a rare auto-immune disorder that causes the body to mistakenly attack hair follicles. When the doctor broke the news that her hair would not be growing back. Wride admitted; "I think I took it harder than she did; I would just bawl and cry sometimes." Gianessa also struggled to grasp the full weight of what was happening to her; Wride told CNN:

Like any 7-year-old, I think, she expected that it would just grow back because everybody has hair.

Fortunately, the Wride family decided to focus their energy on being positive and making sure that Gianessa felt included and confident. So when her Salem, Utah school held a "Crazy Hair Day" competition, Wride told CNN she was determined to make sure Gianessa participated in a way that made her feel special. She headed to Wal-Mart and found some beautiful bedazzled scrapbooking stickers; jewel-toned hearts and flowers and tiny gems. And they covered Gianessa's fabulous little head with the jeweled stickers.

They just fit her personality. She's so vibrant and full of life and she loves everything sparkly.

Not only did Gianessa manage to feel included on "Crazy Hair Day"; she won the competition with her gorgeous jeweled head. Gianessa was the belle of the ball, telling ABC News that everyone loved her jewels:

When I walked in, everyone was crowding me about the jewels.

She plans to keep the look of a jeweled head (because obviously, it's amazing), and hopes to add to the design as time goes on. Both mother and daughter have chosen to embrace Gianessa's own originality, rather than staying fixated on the hair that won't grow back. As Wride told CNN:

She knows that it won't grow back and she has just embraced that and is still living life to the fullest and doing everything that she still loves.

They hope their story helps inspire other young people with alopecia. In reality, a little girl with that much optimism inspires us all.