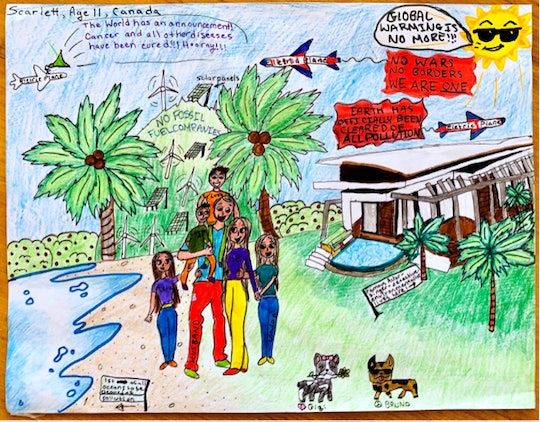 Courtesy of The Body Shop

Girls Drew Their Dreams For The Future & It Looks Amazing

The mind of a girl is a powerful thing. As someone who was a girl and is probably still a girl underneath all of the woman stuff, I can tell you that there tends to be a whole lot more going on below the surface than you might think. There's a lot of planning and hoping and dreaming and building going on, and sometimes a person just needs to offer a little guidance to unlock all of that potential. Or, in this case, some colored pencils. Just in time for International Day of the Girl, The Body Shop unveiled a new project featuring drawings from girls around the world to get an idea of what they see for the future. And don't worry, it looks like they're working on fixing everything.

International Day of the Girl 2019 takes place on Friday, Oct. 11. It was a movement started by the United Nations in 2012 in an effort to "highlight and address the needs and challenges girls face, while promoting girls' empowerment and the fulfillment of their human rights." And this year, The Body Shop decided to reach out to more than 70 girls between the ages of 5 and 14 in 30 countries to draw and describe their "dream for the future." The company also asked the girls to rank things like health, education, travel, love, family, and the planet in order of importance. And their answers were surprisingly clear. When the girls were asked to rank what they believed to be the most important for a happy future, the consensus among them appeared to be: Living a happy life, having a family, and being healthy.

The least important factors appeared to be things like "having lots of money" and "being famous," which will hopefully put the old cliché that kids are becoming more materialistic to rest. While every country had at least some concern for the environment, it seems as though at least 50 percent of girls in the United States were concerned about the environment for their future happiness. Meaning Swedish climate crisis activist Greta Thunberg, who is herself only 16 years old, is perhaps not the anomaly climate change deniers might have you believe. Yes, she's dealing with the issue on a global stage, but her concern for the environment is shared by other girls her age and younger.

Like 7-year-old Tabitha from New York, who wants her future world to be "full of the good things in life such as kindness and healthiness." The young girl shared with The Body Shop that she "would change the world too... I would get rid of guns, stop killing animals and find a different way to eat meat." Tabitha is clearly onto something as National Geographic has reported that meat consumption has "dire consequences for the planet."

Amelia, an 11-year-old girl from North Carolina, said she dreams "about people being healthy and not getting hurt."

"I hope that in the future the world is a safe place and people are not afraid. I’d like to stop bad people from hurting children and make sure that all children can live in a safe place with people who love them," Amelia said.

A wise 9-year-old girl named McKynzie from New York said she wants to "change the world by inventing a tree that grows money so people don’t have to work so hard," and yes to all of this.

"As a grown up, the world around me looks busy," she also said. "But the world is beautiful with lots of trees and flowers."

Then there's 11-year-old Scarlett from Canada who explained she hopes the future is a peaceful and happy place. And she's got motivation to make it happen.

"The Earth would not be polluted and there would be no fossil fuel companies at all. There would be NO WARS, and the world would live as one," she said. "There would be 100x less shootings, kidnappings, murders, rape, and things like that. Cancer would be cured!!! And all other diseases and illnesses! Global warming would end!!! If I could, I would change the world completely! I would stop all fossil fuel companies and I would build houses for the poor and end world poverty. I’d also somehow stop global warming. I would donate lots of money to science research to find a cure for cancer. I would somehow end war."

Beyond the environment, the girls who were asked had their future careers on the brain. Working in education and science was a popular idea as was working with animals or in public service.

Like 10-year-old Leonor from Chile who wants to be both "an astronomer and famous football player" when she grows up. "In the future, I imagine that the planet will be clean but there will be too much technology in the world," she said. "If I could make a change to the world, I would. I want the world to be fair and equal for everyone."

And 12-year-old Hollie from Scotland wants to be "a zookeeper and live in a big house" when she grows up. "I would have two cats, a daughter and maybe a husband," she said. "I think that in the future the world will look dull and be over-populated."

Perhaps we should be spending more time listening to the hope and dreams of girls instead of trying to inhibit them. Because they clearly make more sense than you might think.