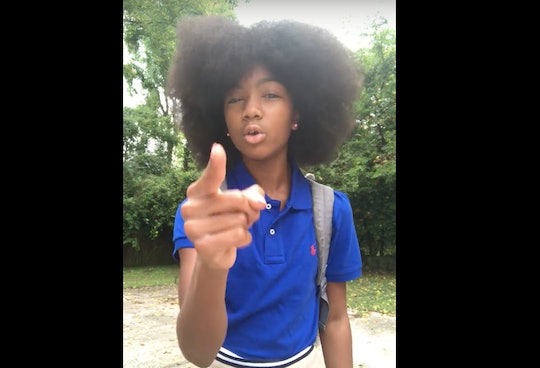 I don't think I can ever say this enough: it's unbelievably tough to be a kid. We forget as adults sometimes what it's like to get up in the morning and head out to school as a 10-year-old. Beyond all of that school learning you have to do, there's also the social stuff. Wanting to be accepted as you are, not always really even knowing who you are and flailing a little along the way. It's incredibly fraught. But there are some kids who ahead of the pack when it comes to self-awareness. Like this incredible girl, whose response to being bullied about her afro is a master class in self-acceptance and confidence. Every person out there who has ever struggled to be themselves in the face of criticism should watch it. Adults and kids alike, in fact.

Qui Daugherty of Nashville, Tennessee recently shared a seriously uplifting video made by her 10-year-old daughter Promise Sawyers. It seems Promise has started a new middle school this year and already she's had a bit of trouble. When she first started at her new school in August, she was wearing her hair in small braids. But then she decided to change things up and wear her hair in an afro, as she explained to Fox 17, because when she wears her hair like that, "I felt confident and pretty." She added, "At my old school, people thought my hair was cool."

Apparently kids weren't as complimentary at her new school. But don't worry, Promise wasn't about to let a little negativity dim her light. And she made a video, which her mother later shared on Facebook, explaining exactly why she was wearing her hair "bigger and better" in response.

"Good morning; so yesterday I went to school and I wore my hair in an afro like this, and a lot of people had a lot of mean things to say about it," Promise explained in the video, which her mom posted after watching her take the initiative to film it herself and has now been viewed on Facebook more than 1.8 million times in five days. "So that made me feel some type of way. So yesterday when I came home I told my mom and she said, 'Promise, don't forget who you are and whose you are.' I said 'OK.'"

She continued, "So today I'm going to go to school and I'm going to come back bigger and better. Don't let anyone tell steal your joy. Don't give them that power."

People were incredibly inspired by Promise's video, taking to Daugherty's post to tell the young girl that she was helping them to be braver in their own lives. "You're making me BRAVE! YOU'RE INFECTIOUS. Nothing going to steal my joy!" one person commented on Facebook. Another said, "I am so proud of you. You are so beautiful & wise, stay strong and sweet."

Promise made a decision to be herself in the face of adversity simply by wearing her hair the way she wanted, and now here she is inspiring people all over the internet and heading to Los Angeles to be a guest on Kelly Clarkson's talk show. She didn't let anyone steal her joy, and now she's sharing that joy with everyone.