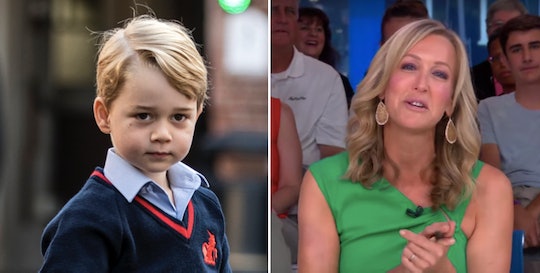 Good Morning America (GMA) co-host Lara Spencer is facing mounting criticism and allegations of bullying after seeming to laugh at an extracurricular activity reportedly enjoyed by one of the royal family's youngest members on Thursday's show. But as the backlash continued Friday, the GMA host apologized for laughing at Prince George's ballet classes, saying she believed "we should all pursue our passion."

"My deepest apologies for an insensitive comment I made during pop news on Thursday," Spencer wrote in an Instagram Story. "From ballet, which I took as a kid, to anything in life you wish to explore, I fully believe we should all pursue our passion. Go climb you mountain — and love every minute of it." Spencer also posted a slightly amended version of her apology to her Instagram feed. Romper has reached out to GMA for comment, but did not immediately hear back.

On Thursday's episode of GMA, Spencer broke down some of the day's news, including a report regarding Prince George's return to school, in a segment the show calls "Pop News".

"Details of George's curriculum have been released, making us all really happy we don't have to do homework anymore," Spencer said. "In addition to the usual first or second grade things, like math, science and history, the future King of England will be putting down the Play-Doh to take on religious studies, computer programming, poetry and ballet, among other things."

As Spencer said the word "ballet" she appeared to hold back a laugh and make a face, prompting others in the GMA studio to laugh.

"He looks so happy about the ballet class," Spencer said when a photograph of a laughing Prince George flashed, released by Kensington Palace in July in honor of the young royal's 6th birthday, across the screen. "Prince William says George absolutely loves ballet," Spencer continued. "I have news for you Prince William, we'll see how long that lasts."

Since Thursday's episode of GMA aired, a number of people came to the young royal's defense on social media. "This adorable boy (Prince George) is being shamed by a grown woman on National Television in America for taking ballet!" Dancer and choreographer Brian Friedman wrote on Instagram. "[Lara Spencer] you should be ashamed of yourself as well as [GMA co-host George Stephanopoulos] for laughing along & @goodmorningamerica for letting public shaming of young boys happen!"

Friedman went on to share his own experience with being bullied for dancing. "She is teaching the word that it is ok to laugh at boys for dancing and that is so sad," he wrote. "Just think about the young boys who may have seen this and could quit their passion at her expense. It infuriates me."

New York City Ballet dancer Ashley Bouder also criticized Spencer for her comments, saying she was "outraged" at what the GMA host had said. "You’ve just bullied thousands of boys around the world. You’ve just told those boys that what they love is wrong on a national stage," she wrote on Instagram. "If anything, Prince George and his parents/family are inspirations to young boys around the world. And to anyone interested in ballet on any level."

The Washington Ballet also took a stand against Spencer's comments, noting on Instagram that, "Adults in the public eye should be encouraging children to follow their dreams, not shaming them out of them." The ballet company then went on to share a few words from company dancer Corey Landolt about the bullying he experienced as a young male dancer.

"I started taking ballet when I was five years old in south Jersey. The bullying wasn't bad then, but as I got older it became pretty unbearable," The Washington Ballet reported Landolt said. "And it's all due to gender stereotypes and toxic masculinity, which that woman (@lara.spencer) is helping to perpetuate." Landolt said he was called names on a daily basis and physically beaten up more than once for taking ballet. "This is the kind of thinking that's kept the U.S. behind Europe in the arts for decades," he noted.

While Spencer has issued an apology via her Instagram page, many on Twitter have said it's not enough and have called on GMA to issue an on-air apology to the young Prince George. On-air apology or not, hopefully Prince George was watching Fireman Sam and not GMA on Thursday.