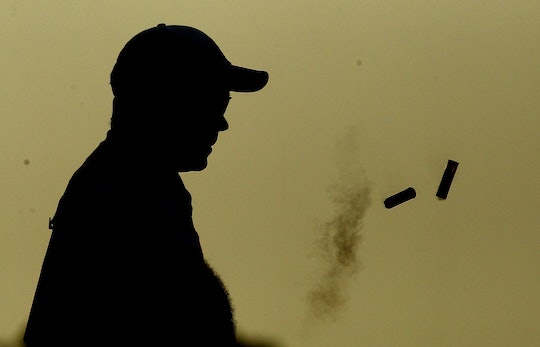 A violent attack at Ohio State University Monday that ultimately left nine injured and the suspect dead was initially (and incorrectly) reported as an active shooter situation, which inflamed both sides of the gun violence prevention debate before authorities could even determine what really happened. By the time it was clear that the perpetrator had, in fact, plowed though a group of pedestrians before stabbing more with a butcher knife, gun rights advocates online had already virtually mobilized to argue that the widespread presence of firearms on campuses would have deterred or halted the ambush. But research and intelligence gleaned from the actual reality of messy, unpredictable, and shudderingly ubiquitous mass shootings in this country shows that the pro-gun "good guy with a gun" argument is a myth, and a dangerous one at that.

The idea that "The only way to stop a bad guy with a gun is a good guy with a gun" originated with NRA executive vice president Wayne LaPierre, who said it at a news conference after a gunman murdered 20 first-graders and six adults at Sandy Hook Elementary School in 2012, according to the Harvard Political Review. As a leader of the most powerful pro-gun lobbying group in the country, LaPierre has a vested interest in propagating this lie, which experts know to be defiantly false — and a real threat to public safety.

That didn't stop the pro-gun brigade after the news of Ohio State broke, though:

The argument from the right goes that the answer to preventing mass shootings that happen in public spaces with alarming frequency in the United States is to ensure that "non-criminals" are armed and ready to fight back in venues like schools, movie theaters, churches, and malls. So, instead of implementing responsible gun safety measure that would make it harder for potentially violent people to purchase deadly firearms in the first place, we'd live in a society completely saturated with them.

In practice, though, the "good guy with a gun" theory simply does not hold up. When a highly skilled gunman killed five police officers at a Dallas protest against the recent police shootings of black men in July, the city's mayor said open carry laws and the fact that at least 20 innocent protesters were also carrying guns exacerbated the uncertainty of an already volatile situation.

"That is one of the real issues with the gun right issues that we face, that in the middle of a firefight, it's hard to pick out the good guys and the bad guys," Mike Rawlings said on CBS' Face the Nation. "...The common sense would tell you you don't know where the gunfire is coming from, there were individuals that ran across the gunfire ... so it sure took our eye off the ball for a moment."

In fact, none of the armed civilians stepped in to stop the gunman, which is a good thing. They weren't tactically trained to do so, and as The Washington Post's editorial board put it, the presence of those openly carried guns simply "fed the confusion and amped up the danger."

Another oft-touted "fact" about mass shootings by those who want to keep gun laws in the United States loose is that mass shootings happen exclusively in "gun-free zones." That's not the case, according to Politico. FBI statistics indicate that active shooter scenarios regularly unfold in homes, businesses, and outdoor spaces where there is no prohibition on guns. And that was even true at the Oregon community college where nine victims died as the results of a mass shooting in 2015.

Oregon permits guns on college campuses, and there even was at least one student there at the time of the rampage who was carrying — but Air Force Veteran John Parker, Jr., said on the day of the attack that he and other veterans "made the choice not to get involved," according to MSNBC:

We were quite a distance away from the actual building where it was happening, which could have opened us up to being potential targets ourselves.

It's indisputable that a non-criminal with a gun succeeds in taking down an assailant far less frequently than the pro-gun right would have Americans believe, and that more guns often just add to the chaos inherent to mass shootings. They also aren't an effective deterrent as clinical psychologist Peter Langman told Politico, as many of the perpetrators choose their targets not because they are "gun free zones," but because of the many potential targets who have gathered there:

I don’t think it is. Many of these shooters intend to die, either by their own hand or by suicide by cop. There was an armed guard at Columbine. There were armed campus police at Virginia Tech. The presence of armed security does not seem to be a deterrent. Because they’re not trying to get away with it. They’re going in essentially on a suicide mission ... If you’re going to do an act like this, you need a certain number of people in one space.

Simply put, more guns would not mean less death. Aspiring to a society in which more and more people are armed would made active shooter situations even more deleterious and possibly even cause more situations to escalate into violence.