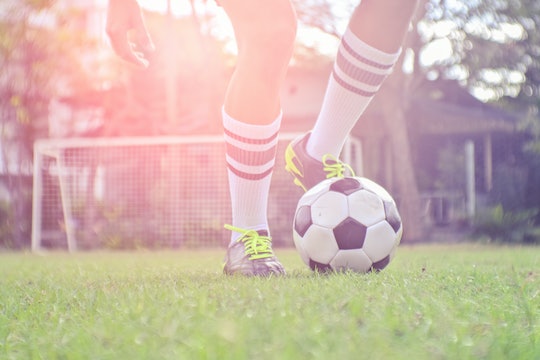 A new bill introduced by Georgia Sen. Kelly Loeffler has been backed by several other GOP senators who want to ban transgender girls from playing in school sports. It's since been met with backlash from transgender rights advocates as well as parents on social media.

The legislation, called the "Protection of Women and Girls in Sports Act of 2020," seeks to amend protections put in place by Title IX of 1972 which prohibits that any person be excluded from "participation in, be denied the benefits of, or be subjected to discrimination under any education program or activity receiving Federal financial assistance," as defined by the NCAA.

According to the bill, Loeffler and four other GOP senators want to see sex be "based solely on a person’s reproductive biology and genetics at birth." The bill would also refuse federal funding to to any school that permits "a person whose sex is male to participate in an athletic program or activity that is designated for women or girls."

"Title IX established a fair and equal chance for women and girls to compete, and sports should be no exception," Loeffler said in a press release introducing the legislation this week. "As someone who learned invaluable life lessons and built confidence playing sports throughout my life, I’m proud to lead this legislation to ensure girls of all ages can enjoy those same opportunities. This commonsense bill protects women and girls by safeguarding fairness and leveling the athletic field that Title IX guarantees.”

Loeffler’s bill was co-signed by Sen. Mike Lee of Utah, Sen. Marsha Blackburn of Tennessee, Sen. James Lankford of Oklahoma, and Sen. Tom Cotton of Arkansas. Sen. Lee told NBC News in a statement, "Men and women are biologically different, that’s just a scientific fact. For the safety of female athletes and for the integrity of women’s sports, we must honor those differences on a fair field of competition."

The proposed legislation has been met with backlash. In a recent statement, Chase Strangio, the deputy director for transgender justice for the ACLU's LGBT and HIV Project, said that anti-LGBTQ groups have shifted their focus from "expelling trans people from public spaces like restrooms and locker rooms" to "trans participation in sports."

"These groups don’t care about sports or women’s rights," Strangio said. "They’re opportunistically looking for ways to attack trans people, and in the process, hurting all women and girls."

On Twitter, one critic of the bill pointed to the fact that all kids have a right to play sports. "If you want a level playing field, you let ALL the kids play. That includes transgender kids. What kind of message are you trying to send... that they are less of a person, and therefore can't participate in normal childhood activities? That's just pathetic."

Should the bill pass, another noted that it could open the door for other types of discrimination in school sports. "This will open up discrimination lawsuits for the physically/ mentally handicapped cut from teams as this implies one's genetics makes them superior or inferior."

Loeffler's bill is not the only attempt to stop trans girls from competing in team sports with other girls. In Connecticut, as Advocate reported, parents of three cisgender high school girls won a lawsuit claiming that the inclusion of transgender girls was a violation of Title IX; the Board of Education is currently deciding whether or not to strip federal funding from schools who allow trans girls to participate.

In Idaho, as LGBTQ Nation reported, legislation was recently introduced by GOP Rep. Barbara Ehardt that would allow "genital exams" for girls hoping to compete in team sports. In a statement about the bill she was backing, Ehardt claimed she was "supporting girls." "It is disheartening to think that some athletes, under the guise of equality, do not support girls and women as they pursue their dreams to stand atop the podium as a champion because a biological male had taken her spot," Ehardt said.

As for Loeffloer's bill, it needs to make it through the Democratic-held House of Representatives before it can be passed.