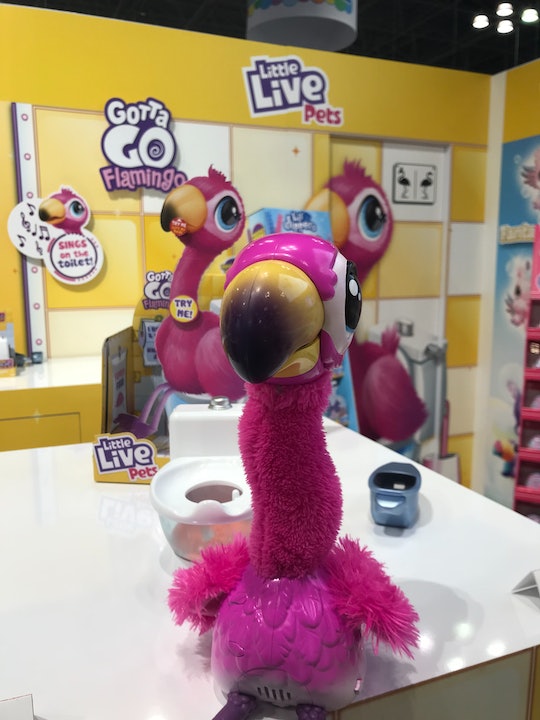 Gotta Go Flamingo Comes With A Potty So He Can, Y'Know, "Go"

Baby dolls that can "eat," "pee," and mimic other real-life baby bodily functions have been around for awhile, but stuffed animals with the same, er, talents? Not so much. Until now, that is: The Little Live Pets Collection from Moose Toys is debuting a 2020 spin on those "real" baby dolls: The Gotta Go Flamingo. That's right, kiddos of today can have their very own spoon-fed, potty-trained exotic pet.

Little Live Pets come in a variety of species, all designed to give your child the fun of a pet without the mess for you. From romping robot puppies and sleepy bear cubs to wrist-wrapping vipers and unicorn vet sets, they've got the perfect pet for any child's interests. They're designed to look, sound, and act real, keeping little ones engaged and entertained.

Moose Toys presented their newest Little Live Pets at the 2020 American International Toy Fair, and they include some of the trendiest animals out there. These furry and feathery additions will be available in stores later this year, but first impressions are everything, and boy does the Gotta Go Flamingo make its presence known. This hot pink bird sings, chats back to its owner, records and repeats what you say, eats, and even poops. The Gotta Go Flamingo won't hit store shelves until October, but there are some hilarious things to look forward to when it does.

So, what's the deal with this big-eyed birdie? When you feed the Gotta Go Flamingo his special food mix with a dash of water, he happily chows down. Watch him wiggle and wag his long flamingo neck back and forth as he swallows and does his own version of a happy dance, thanks to his full belly.

But don't stray too far after feeding time. Soon after meal time, you'll hear it holler, “Uh oh, gotta go!” That's your kid's cue to grab the included, flamingo-sized toilet to catch his squishy, neon poop. Once he's done, he can do it all again, so this toy can be played with repeatedly. The Gotta Go Flamingo is intended for children between 4 and 8 years old, and will retail for $30. Little Live Pets are sold on Amazon, and at Walmart and Target, so keep an eye out for them there.

But fear not, parents whose kids get attached to their toys and want to take them everywhere. The Gotta Go Flamingo isn't attached to his tiny toilet, so you can leave the loo at home and take the flamingo along solo. His soft neck and wings mimic the feel of feathers, but his plastic body protects his inner workings so his flamingo food and water routine can't damage them.

Little Live Pets is also releasing some miniature pets at an even more affordable price point. This range includes a Lil' Bird, which moves, feels, and sounds like a real pet bird, and can be purchased with a wee little birdhouse. The new Lil' Butterfly is designed to flap its wings in your hand, and there are six unique looking butterflies so your little one can collect multiple. And the Lil' Turtle has lots of shell designs your kiddo can admire as he crawls and swims around.