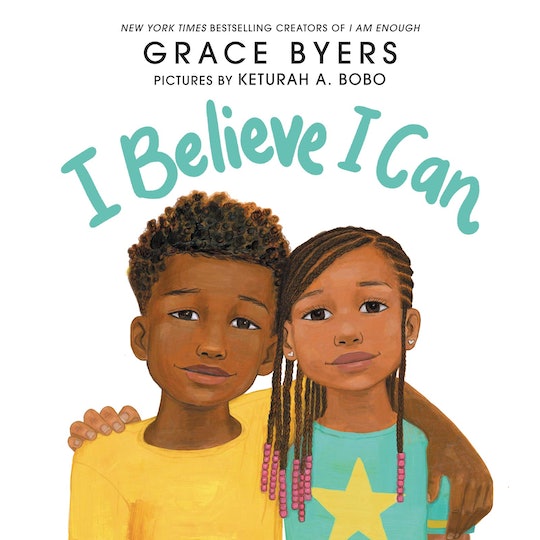 Grace Byers had two favorite books when she was a kid: The Giving Tree by Shel Silverstein and Fantastic Mr. Fox by Roald Dahl. While both are very different stories, it's that overwhelming theme of unconditional love that make them so similar. And it's safe to assume the same theme helped inspire Byers' children's books, including her latest, I Believe I Can (Balzer + Bray).

"I loved The Giving Tree because the symbolization was so powerful: the idea of a tree giving ‘life’ constantly and graciously. Trees provide us with actual life (oxygen, cutting down greenhouse gases and energy conservation) so, looking back, I love that imagery use," Byers, who is known for her roles on Empire and Marvel’s The Gifted, tells Romper in an emailed conversation. "But when I was a child, I was moved by the display of unconditional love. Giving — but not requiring to receive in return. It’s never not a touching story." And as for Fantastic Mr. Fox? Byers said she loved this witty story for its lesson in "trusting in your abilities and never losing hope."

Sounds a lot like the theme behind I Believe I Can, which joins the list of pictures books that authors like Byers are writing to build children's confidence. Her 2018 book I Am Enough is a New York Times best-seller, and I Believe I Can looks just as promising.

Both books are similar in that they were written to encourage and inspire young children, but Byers says there's a difference. "I Am Enough speaks to your incomparable value and worth — that fact that you are. I Believe I Can speaks to what you are able to do — the fact that you can. Once you know who you are, then you will begin to tap into what you can do in this world." OK, maybe I also need to read this book.

'I Believe I Can' by Grace Byers
Amazon

Byers probably agrees. She believes that the necessity for these books is overwhelming, that the world we currently live in confines people and instills them with fear and doubt. Her books challenge that world to shift, offering the chance for voices to be magnified, for "I can and I will" to be louder than doubt.

"I did so much growing up — sports, ballet, singing, playing piano, dancing. There were many times when it was clear that others didn’t believe in me and in some of those moments, I chose to adopt their assumption of me instead of embracing God’s reflection in me," Byers says. "I think if I had I Believe I Can growing up, I would have taken more leaps, trusting that I could do it." And it's why she hopes her own children take some of that confidence-building magic away from the story, adding that she wants her children to learn that they are not defined by any circumstances or limitations holding them back. "That they are, instead, empowered by their abilities and propelled by their potential."

With sweet illustrations by Keturah A. Bobo featuring an incredibly diverse group of characters, children can see themselves in the affirmations Byers writes. "My presence matters in this world. My life is worthy; there's a plan," one page says. "I know I can do anything."

That kind of positive thinking is what helps confident children to grow. And when children are confident in their abilities, they're more empathetic and eager to help others. It all works in a big, giant circle. And then, as Silverstein wrote, "And the tree was happy."