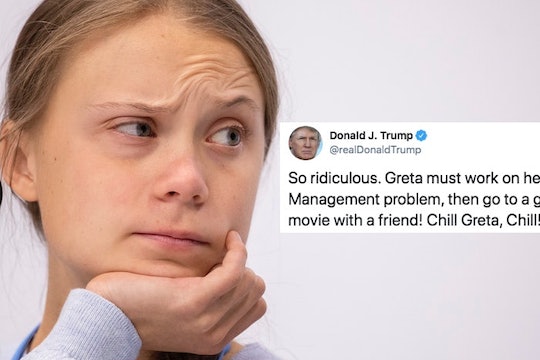 Grown Man Keeps Bullying 16-Year-Old Greta Thunberg, But She Can Take Him

Not long after TIME named 16-year-old climate activist Greta Thunberg as the magazine's 2019 Person of the Year, the President of the United States took to Twitter to mock the teenager, telling her to "chill." Not one to be intimidated by adults with powerful titles, Thunberg responded to President Donald Trump mocking her TIME title in a subtle, but strong, way that highlights just how absurd his comments are.

After years of appearing to chase after TIME's Person of the Year award, Trump responded to news that this year's honor had gone to Thunberg by publishing a tweet early Thursday that appeared to mock the teenager. "So ridiculous," Trump tweeted in response to people congratulating Thunberg. "Greta must work on her Anger Management problem, then go to a good old fashioned movie with a friend! Chill Greta, Chill!"

While Thunberg has not directly commented on Trump's tweet, she responded to his attempt to mock her by changing her Twitter bio to read, "A teenager working on her anger management problem. Currently chilling and watching a good old fashioned movie with a friend."

It was a subtle, but no less powerful, way of pointing out the ridiculousness of Trump's criticism. What's more, it's a tactic Thunberg has used before when Trump and other critics have attempted to bully her into silence. The Wayback Machine, which serves as a sort of internet archive, found her bio previously described her as, "16 year old climate and environmental activist with Asperger's."

Shortly after that, however, The Hill reported Thunberg had changed her Twitter bio again. This time she described herself as "a kind but poorly informed teenager," a reference to comments Russian President Vladimir Putin was reported to have made about her.

Trump's most recent tweet about Thunberg comes roughly one week after First Lady Melania Trump appeared to chastise a witness called to testify in the House's impeachment hearings for mentioning the president's 13-year-old son by name. "A minor child deserves privacy and should be kept out of politics," the first lady tweeted, before accusing the witness of using a child to angrily pander to the public.

Moreover, Trump's tweet appears to fall short of the first lady's Be Best initiative, which seeks to teach youth "positive online behaviors" and promote values like "encouragement, kindness, and respect."

Given how Trump has tweeted about Thunberg, it's unlikely the two will ever meet. In fact, Thunberg has previously made it clear that she doesn't see any value in meeting with Trump to discuss climate change. "I don’t understand why I would do that," the teen said during a November appearance on The Ellen DeGeneres Show. "I don't see what I could tell him that he hasn't already heard, and I just think it would be a waste of time, really."