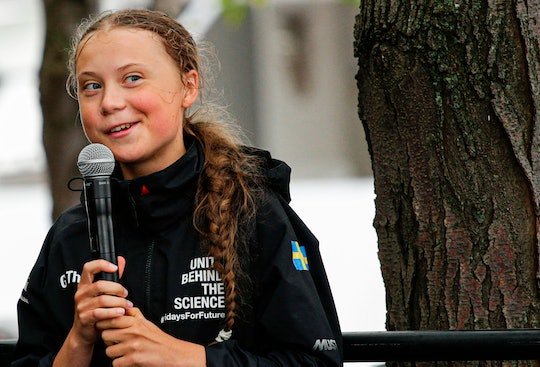 Oh how it must sting when old tweets come back to haunt you. As the country continues to wait to find out who's been elected, climate change superhero Greta Thunberg trolled President Donald Trump on Twitter and it was a moment of perfect symmetry.

On Thursday, President Trump took to Twitter to share an all-caps message saying he wanted poll counters to "STOP THE COUNT" as mail-in ballots continued to shift in favor of his opponent, former Vice President Joe Biden. Trump had become increasingly incensed since election night left Americans with no clear victor in the presidential election, using his social media presence to question the veracity of the mail-in ballots as well as launching unsubstantiated accusations against Democrats about voter fraud.

It has been incredibly tense... but at least one notable young person couldn't help poke fun at him. TIME's Person Of The Year for 2019, no less. Yes, Thunberg, the Swedish climate activist and all-around spectacular human being, took to Twitter on Thursday to mock Trump by writing, "So ridiculous. Donald must work on his Anger Management problem, then go to a good old fashioned movie with a friend! Chill Donald, Chill!" and sharing his "STOP THE COUNT" tweet from earlier.

If Thunberg's attempt at a burn against the president seemed a bit stale, hold on a second. Because the real take down was the fact that she used his own tweet against him. On Dec. 12, 2019, Trump tweeted in response to the news that the young climate activist had been named TIME's Person Of The Year, "So ridiculous. Greta must work on his Anger Management problem, then go to a good old fashioned movie with a friend! Chill Greta, Chill!" Perhaps Trump was feeling a bit envious that he had not won the honor himself as he did in 2016.

And that, my friends, is how it is done.

Twitter users shared their appreciation of Thunberg's incredible timing, like this social media user who wrote, "Greta is ice, she waited a full year to troll Trump, and her timing was epic!" Another wrote that Thunberg clearly won this little feud, "Trump even lost to Greta tonight."

Trump did not respond to Greta Thunberg's takedown. Perhaps he knows when he's been beat.