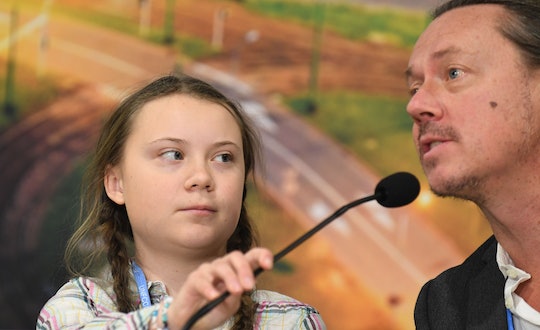 While many people across the globe are inspired by Greta Thunberg's activism, there are some who take issue with the teen's passion to confront climate change head on. And there are others who've claimed her parents have filled her head with "nonsense" and pushed her into the spotlight. Except, that's not how it happened at all. It's quite the opposite, in fact. In a recent interview, Greta Thunberg's dad admitted he didn't support her activism at first and actually feared it would be a "bad idea" for her to get so involved in very pressing, yet divisive issue.

During a recent broadcast of BBC Radio 4 Today, not only did the 16-year-old have a chance to Skype with the person who inspired her activism — Sir David Attenborough — but her father Svante Thunberg also opened up about Greta's journey. In doing so, he revealed his daughter had been battling debilitating depression for four years ahead of the fame brought on by her activism.

"She stopped talking, she stopped eating, and all these things," Svante told BBC Radio 4 Today, during the program for which Greta guest-edited. "She stopped going to school. She was basically home for a year, she didn't eat for three months." He described this period in Greta's life as "the ultimate nightmare as a parent."

Things got so bad with Greta that Svante and his wife — opera singer Malena Ernman — stopped working to care for her. At the time, she would only speak to her parents, her sister, and one teacher at school. When Greta expressed interest in becoming an activist, both of her parents were strongly against it, Svante told BBC Radio 4 Today.

"We thought it was a bad idea, putting herself out there with all of the hate on social media," he said. "And you know, just the idea of your own daughter sort of putting herself at the very frontline of such a huge question like climate change."

Ultimately, Greta's parents relented and began supporting her endeavors. Ernma stopped flying to opera events and Svante became vegan. "I didn't do it to save the climate, I did it to save my child," Svante told BBC Radio 4 Today. As a result of her parents allowing her to engage as an activist, Greta slowly crawled out of her depression. During her first sit-in outside of the Swedish parliament, Greta answered questions from journalists who came up to her. By the third day, she ate vegan pad thai someone gave to her.

Of course, Greta's work as an activist not only transformed herself — it also sparked a global movement that continues to shed light on the climate change crisis. Her impassioned speech to World Leaders at the United Nations in September was one heard around the world.

"You have stolen my dreams and my childhood with your empty words. And yet I'm one of the lucky ones. People are suffering. People are dying," she berated them, continuingEntire ecosystems are collapsing. We are in the beginning of a mass extinction, and all you can talk about is money, and fairy tales of eternal economic growth. How dare you!

Heck, Greta was named TIME's Person of the Year 2019 and was even nominated for a Nobel Peace Prize.

At just 16, Thunberg has commanded the attention a worldwide audience and, as her father feared would happen, a host of critics, including President Donald Trump. But with her passion, drive, knowledge, and support from her parents, she has proven to be one an inspirational young woman.

More Like This
Teacher Shot By 6-Year-Old Student Told School He Had A Gun, Was Told To "Wait"
Florida Teachers With “Unvetted” Classroom Books Could Face Felony Charges
Michigan Right-Wing Group Wants To Erase LGBTQ+ Sex Ed
The President Of Ireland Wants To Get Rid Of Homework & Honestly, He's Onto Something
What Parents Are Talking About — Delivered Straight To Your Inbox