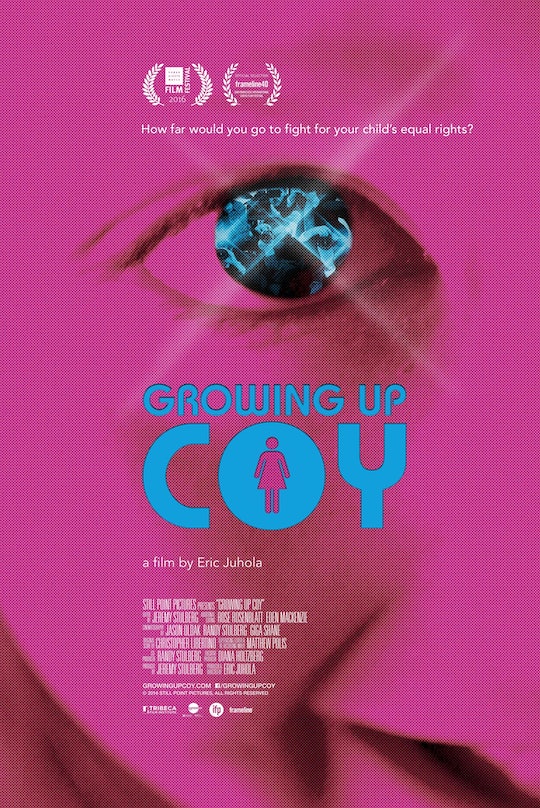 'Growing Up Coy' Is A Must-Watch Doc On Netflix

When Coy Mathis’ school told her parents that their daughter could no longer use the girl’s bathroom because she was transgender and had to use either the boy’s bathroom or the school nurse’s bathroom, they decided to fight. What came out of that fight was a landmark court decision upholding transgender youth rights. Growing Up Coy follows the Mathis family’s journey as they decide to take their fight for their daughter’s rights public and as they endure the media firestorm that followed.

The film, which is coming to Netflix and iTunes on Jan. 6, is a must-see for anyone interested in transgender rights and issues facing LGBTQ children. With the film, director and producer Eric Juhola has shone a light on the lived experience of Coy herself — and why issues like anti-transgender bathroom bills are so harmful.

What is remarkable about the film is that it does such a wonderful job normalizing Coy and her family. Coy’s mother, Katherine, says, “We are not the ones who stigmatized her,” and it's refreshingly clear that neither do the documentarians. In their house, Coy is just Coy. Coy is just a little girl. But outside of that space — at her school, where the trouble started — Coy or her parents have to qualify her gender; they have to prove it, over and over again. And that is stigma.

Eric Juhola filmed the documentary over the better part of three years, concentrating most on the six month span where Coy’s family went public with their discrimination suit and became national news. Through the course of the film, viewers see the family handle the immense stress of media scrutiny, which impacts Coy herself, her siblings, and her parents all in different ways.

“It was really important for us to focus on the parent’s perspective in the film, and not just on Coy,” said Eric Juhola, the film’s director/producer. “Jeremy and Kathryn are two young millennial parents who are heterosexual and cisgender who grew up in conservative areas, like a lot of parents around the country.” Watching Jeremy and Katherine Mathis struggle with each decision along the way is powerful. What would any of us have done differently, if anything at all? It’s hard to watch two people make their parenting decisions so public and know what, precisely, to think, but the documentary gives such an intimate insight into their lives that it is clear that at each step of the way the decisions are driven by what they believe is best for their daughter. For so many of us, isn’t that what drives our own parenting decisions?

Juhola explains in an interview with Romper the impact he hoped the film would have. He said he saw a major audience for the film in school administrators, principals, parents, and lawmakers. “If you meet Coy, and you spend 82 minutes with her, it offers you an understanding of the experience of what it is to be transgender,” he said. He hopes that such an understanding can influence these policy makers to create safer spaces for transgender youth in schools across the country. Currently, he and his team are working to start screenings for these groups.

The screenings of the film so far have mostly been on the festival circuit, but Juhola says they have been eye-opening. “Almost every parent at a screening now knows of someone in their school system that is transgender or gender non-conforming,” he said. “The more that happens, the more our culture will adapt and realize this is not a disorder. This is an identity to be proud of.”

You can watch Growing Up Coy on Netflix beginning Jan. 6. For more transgender resources, check out the film's website.