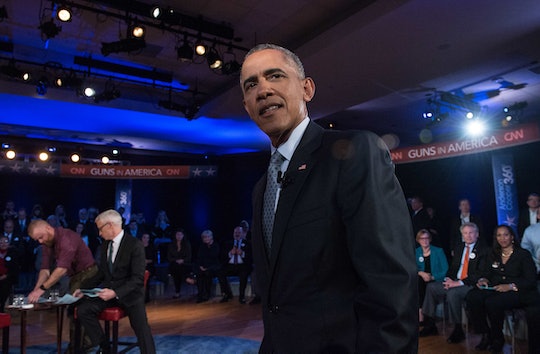 During Thursday's Guns In America town hall on CNN, the president commented on the fact that while some fear he may be trying to take away their firearms, gun sales under President Obama have actually gone up. Not only that, but gun sales specifically tend to spike right after mass shootings — even more so whenever the president speaks out about gun control in general. The end result has been that guns are flying off the shelves at shops, concealed carry permit courses filling up, and companies like Smith and Wesson are making about $180 million in just three month’s time, according to a BBC report this week.

Yet because these spikes happen more so whenever the president mentions enforcing gun control laws, Obama is now sarcastically being called “the greatest gun salesman in America”. It’s a title that goes completely against what the president has been seemingly attempting to do in the first place: curb our nation’s obsession with guns. It's also a pretty confusing phenomenon.

In a speech this past Monday, Obama highlighted a series of planned executive actions that would call for stricter background checks on those who purchase guns, even at places like gun shows or online, where individuals can buy firearms without such restrictions and often at a much lower cost. At the moment, purchases at gun shows are especially cause for concern since literally anyone could plausibly attend a show — including people with a history of violence or mental instability — and purchase any number of weapons on the spot. Those weapons could then potentially be used for anything from a mass murder to suicide, something the president also mentioned under the umbrella of gun-related deaths during Thursday's event.

While some at the town hall, such as Taya Kyle, widow of former U.S. Navy Seal Chris Kyle (who was the inspiration for the film American Sniper) suggested that tighter background checks wouldn't improve the rate of gun-related crime, the president was quick to explain that attacking the problem from a number of sides, including enacting stricter regulations, was precisely the right way to help solve the current epidemic.

Comparing gun control to vehicle safety regulations, the president was able to easily illustrate how just as auto mobile related-deaths have been curbed thanks to things like seat belt enforcement, there’s good reason to believe that making it more difficult for those with criminal backgrounds or mental health issues to obtain guns may also help curb gun-related violence. To many, Obama's views on gun control are merely common sense.

But explanations like these haven't convinced everyone, and many are expressing their concern that, going forward, guns will be more difficult to obtain.

Kimberly Corban, a woman who was previously raped at gunpoint and is now an NRA advocate, expressed concern on Thursday that these background checks would make it harder for her to purchase a gun to protect herself and her children. In response, Obama was quick to reiterate that for individuals like Corban, who have no criminal history, purchasing a gun would not be any more difficult than it had been previously. It's a statement the president has made numerous times throughout his presidency, but one that needs reiterating due to rising paranoia that somehow the president will find a way to end gun sales.

There are several news stories coming out now that reinforce this belief. Take for example this story out of Wisconsin, where several gun store owners like Ray Gwinn of Ray’s Gun Shop in Wisconsin Rapids told reporters that distributors were falling behind in their orders due to the number of people now rushing to purchase firearms. The reason for this? "People think the government is going to try and take their guns," Gwinn explained, in a comment to The Wausau Daily Herald this week.

Whatever the case, it's clear there's a lot of confusion and fear among the public on both sides of the issue. Despite the president's best efforts on Thursday, in the long run, his well-intentioned actions may fall flat.