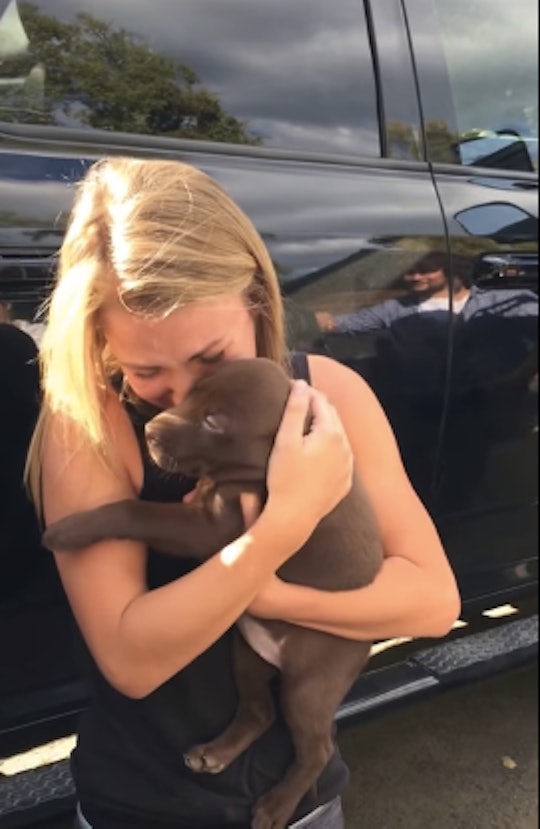 Guy Proposes With A Puppy Instead Of A Ring, & It's Not The Only Time Animals Helped Put A Ring On It — VIDEO

Just when you thought there were already enough cute proposal videos, it turns out there’s a guy who came up with another one to make the entire internet sigh wistfully. In this video, Shelby Turner was surprised with an adorable chocolate lab puppy by her boyfriend. That alone was enough to bring her to tears, but then her boyfriend asks her to look at the puppy’s name tag, and proceeds to win the internet. Turns out there was a ring attached to her new puppy’s collar!

Turner clearly had no idea what was coming, and the shock as her boyfriend gets down on one knee will give you your much-needed smile for today. Unless your heart is made of stone, in which case I can’t help you. Sorry. She literally cannot even (I know we are supposed to be done saying that we "cannot even" but you guys! She cannot even.) with this whole situation, asking, “Is this real?” Honey, that ain’t no gumball machine ring I spy on your finger.

All I have to say about this is thank goodness people are continuing to catch these moments on video and posting them, because when we have so much bullsh*t happening in this wasted world, we need to find those moments that can help restore our faith in humanity.

Check out the video here:

And if you want to take a moment and watch more adorable moments when animals helped with a proposal, take a look at these cute videos.

Albeit this one uses a different tactic: the whole "we can't raise this baby while we're living in sin" angle. Also, champagne, flowers strewn everywhere and a GoPro cam.

Then we've got a dog who's a little longer in the tooth (so to speak), and has been in the family for a while. He goes over to his mom with a little present attached to his collar, and everything happens so quickly, someone forgets that he actually has to propose and not just give his girlfriend a ring. Too cute.

Wait, No, I Found Some Kittens!

And finally, we have some kittens helping out with a proposal. This video is a little on the long side, so skip to the 6-minute mark if you want to catch the actual proposal. Very sweet, and interestingly, the girlfriend actually asks "Is this real?" exactly like Turner does, in the first video. I guess it would be kinda hard to believe that your life is actually that cute.

More Like This
Sex & The Single Mom: Grieving Divorce
What To Write In A Valentine’s Day Card
Soul Ties: What Does It Mean & How To Know If You Have One
Here’s Why You & Your Mom Can Fight So Much
What Parents Are Talking About — Delivered Straight To Your Inbox