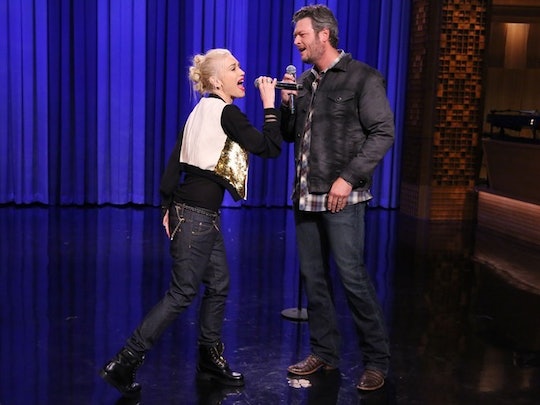 Gwen and Blake Are Officially Dating, & Here Are 5 More Celeb Couples Who Met At Work

Yesterday, mere hours after I totally insisted that Blake Shelton and Gwen Stefani are a couple, Gwen’s rep confirmed the news to multiple sources. (Wait, does this mean that Gwen reads Romper? Hi, Gwen! Congrats on the new — or is it? — relationship!) Although the rep told TMZ that the pair have only been together for “days,” that’s coincidentally how long we’ve had photographic evidence that really couldn’t be explained. Dating rumors have surrounded the now-confirmed couple since this past summer, when Shelton divorced his wife, Miranda Lambert, and Stefani divorced Rossdale a mere two weeks later.

This isn’t the first time that Gwen has found love while on the job, either. She met her ex-husband, Gavin Rossdale, when their bands (No Doubt and Bush, respectively) toured together in 1995. And before that, she dated the bassist for No Doubt, Tony Kanal. It can be hard to meet people when you're a superstar, and harder still when you're working all the time. So it's no surprise that plenty of celebs end up dipping their pen in the company ink, if you catch my drift. (Admittedly, not a hard drift to catch.) Take a look at some of the other famous couples who started out as colleagues before getting together: