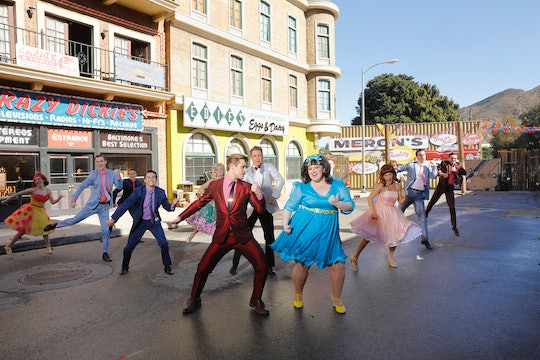 ‘Hairspray Live!’ “Good Morning Baltimore” Performance Starts The Show Off With A Bang

The opening number for any show sets the tone for what's to come. It lets the audience know how things are going to be for the rest of the show, and amps up the excitement just when everything is beginning. That's especially true when it's the opening number of a beloved show that's being turned into a live TV musical; everyone watching is waiting with bated breath to see how the newest version of their favorite musical is going to stack up next to the original. The Hairspray Live! "Good Morning Baltimore" performance started the show off with a bang – and a few bumps.

The sunny opening number, which starts both the show and Tracy's day as she heads off to school, was filmed outside just as the sun was setting. One could argue that Tracy was heading off very, very early, but it still felt a little odd for it to be so clearly twilight while Tracy was belting out her salute to the start of the day. The staging was well done (and, it must be said, very similar to that of the 2007 film version), but there were also a few awkward moments that showed the live production was still getting its footing.

While Tracy was dancing down the street and singing her heart out, there were a few distinct moments when her vocals couldn't be heard. Either the sound cut out for a brief moment or lead actor Maddie Baillio missed a lyric; it wasn't clear what happened exactly, but either way, the cast continued without skipping a beat. Baillio didn't seem fazed by the interruption, delivering the rest of the song with the flair and pep that are integral to Tracy's character. (The mechanical rats on the street were also a nice little touch, though John Waters' cameo as the flasher who lives next door was sorely missed.)

Despite any minor hitches, "Good Morning Baltimore" was overall as high-spirited and fun as one would expect. Though one would think any issues would get ironed out in rehearsal, technical difficulties do happen, especially during live performances, and nerves can affect anyone. That small flub didn't end up being a sign of things to come; the number continued with a ton of energy and few glitches.

Ultimately, "Good Morning Baltimore" did exactly what it was supposed to do: get fans hyped and start the show on a high note. Maddie Baillio's fancy footwork and stunning vocals also didn't hurt.