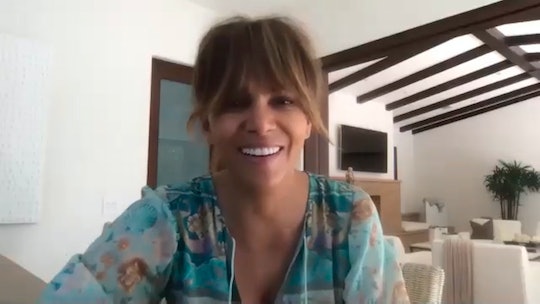 Halle Berry Reveals She's Struggling With Homeschooling, Just Like The Rest Of Us

Distance learning while schools are closed due to the ongoing pandemic is not going well for many parents. In fact, even Halle Berry said homeschooling her kids has been a "nightmare." And at this point, plenty of parents probably couldn't agree with her more.

The Catwoman actress is currently at home practicing safe social distancing with her two children, 12-year-old daughter Nahla and 6-year-old son Maceo. And like millions of other parents across the country, Berry has been trying to figure out homeschooling as schools are closed and in a new interview with Entertainment Tonight, the 53-year-old actress said that it's been a bit of a wrench.

"It's a nightmare for me. It's a nightmare," she told Entertainment Tonight. "This is like a wash of a semester; they're really just not learning anything and it's hard."

Berry went on to explain that her 6-year-old son, whom she shares with ex-partner Olivier Martinez, is especially difficult to teach and she thinks she knows why. "I have a 6-year-old, and what I learned is that when 6-year-olds see other 6-year-olds do things, then they do things," she told the news outlet. "Like, they sit and they eat because there's 25 other ones doing it. They stay at their desks and color because there's 25 other ones doing it."

"At home, there's not 25 other ones doing it," she continued. "So, to get them to focus and realize they're at home but yet they're at school, it's really been a challenge."

While homeschooling might not be her favorite activity, the actress has been enjoying the extra bonding time with her family. In fact, Berry told Jimmy Fallon during a video interview for The Tonight Show on April 21 that her daughter is really enjoying the time at home.

"She hopes quarantine never ends," Berry told Fallon, referring to 12-year-old Nahla. "She loves not going to school, she's a loner, she loves being nestled in." Her son Maceo is a different story, apparently, "he's a mad man right now. He's bouncing off the walls."

Fortunately Maceo comes in handy in one hilarious way; in an essay for Women's Health published on April 17, Berry wrote that she's been using her son as "work out equipment" for leg extensions to stay active during quarantine.

Many parents will likely recognize Berry's struggles. When there are multiple kids in the home with different needs, especially when it comes to homeschooling, things can get rough. One kid might be just fine while another rebels and can't sit still. No wonder Berry says it's a wash for her family right now.