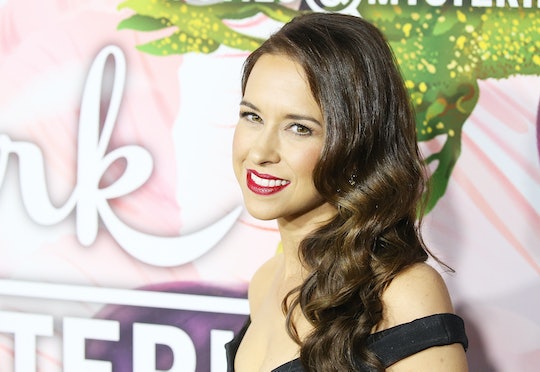 Here are my usual plans for November: Nothing. Halloween is over and I'm Canadian, so Thanksgiving is long over as well. I'm getting close to wanting to do the whole Christmas thing, but my family reigns me in. So I just hang out and live in a weird holding pattern most of the month until I can really dig into the holiday season. This year... oh, this year if I'm really lucky and a really great girl, I might be able to actually do something amazing. Something I never thought would happen. This year, Hallmark Christmas movie fans can now go to "Christmas Con," and if I miss this event I will regret it for the rest of the year — I'm just saying.

If you've never watched a Hallmark Christmas movie, it might be a difficult phenomenon to understand. Imagine Lacey Chabert in fluffy white mittens and a bright red coat traipsing through the snow and falling in love in seven different quirky ways. Or a Christmas tree farm run by a gruff hunk who also lives in a log cabin that is surprisingly charming. Basically if you could make a mug of hot cocoa and turn it into a comforting made-for-TV movie, this is a Hallmark Christmas movie.

And now Thats4Entertainment is bringing them to life for regular people like you and me.

On Tuesday, Oct. 8, Thats4Entertainment announced a three-day convention from Nov. 8 to Nov. 10 for Hallmark Christmas movie enthusiasts in Edison, New Jersey called "Christmas Con." People who sign up for "Christmas Con" will get the opportunity to meet some of the most iconic Hallmark movie stars like the aforementioned Lacey Chabert, Chad Michael Murray, Jack Wagner, Holly Robinson Peete, Melissa Joan Hart, and Alicia Witt, who will also be sharing a musical performance at the event.

What's more, participants will also get to partake in events like an Ugly Christmas Sweater contest where the winner can take home a cool $500. If, like me, you are deeply offended by the concept of a Christmas sweater ever being called "ugly," you can sidle on over to the Christmas Market at the Expo Center in Edison, which will apparently be decorated to look exactly like a Hallmark Christmas movie set.

Also you can get your photo taken with Santa, and since this event is so high-end it might even be the the real deal. Tickets for the event can be purchased for just one day for $35 or the entire three days for $75, according to NJ.com.

The Hallmark Channel, who is celebrating 10 years of Countdown to Christmas, is the official sponsor of "Christmas Con" in New Jersey, but will also take this show on the road for Hallmark Channel’s Hometown Christmas. There will be events in places like David City, Nebraska (the birthplace of Hallmark creator Joyce C. Hall) and Beauregard, Alabama. "From North Pole, Alaska to Santa Claus, Indiana, and everywhere in between, America’s small towns and cities at Christmastime remind us of what it’s truly like to live in a holiday-haven worthy of a Hallmark movie," Crown Media president and CEO Bill Abbott told to People.

I am definitely going to this thing. And if I fall in love, that means there will be a Hallmark Christmas movie about me next year — be ready.

This article was originally published on Oct. 9, 2019