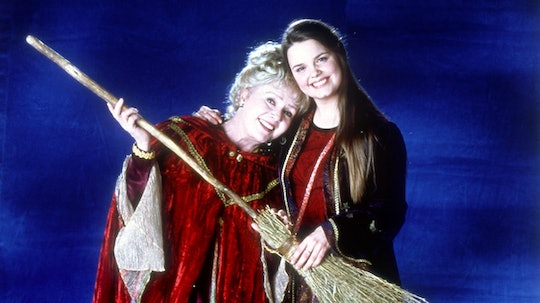 It’s that time of year again where we hop on an enchanted school bus and get whisked away to a magical world, where ghouls, goblins and things that go bump in the night live together in harmony. Sound familiar? Of course it does, that's the set up for Disney Channel’s Halloweentown, which premiered 22 years ago. To commemorate the spooktastic classic's anniversary, its leading witch, Halloweentown actress Kimberly J. Brown, recreated her iconic costume that she originally wore in the 1998 film.

Over the weekend, the 35-year-old actress shared a video on TikTok of herself transforming into Marnie Piper from Halloweentown after she puts on purple velvet witch hat. "Just wanted to see if it still fits," she captioned the video, which features spooky instrumental music and then Cali Swag District's "Teach Me How to Dougie" once the transformation is complete.

With over 2 million likes on TikTok so far, it's clear fans of the classic Halloween movie loved Brown's cute video down '90s nostalgia memory lane.

"Do you know how much you mean to us every year," one fan commented, while another wrote, "10 year-old me is screaming!" One more excitedly chimed in, "Omg yesss your face is still the same sweet face, my children love Halloweentown!"

One fan even made a request for Brown to return to the series, this time as the mother. "So...um...can we please get another Halloweentown with you, but now Marnie is a mom?" they wrote.

Brown also shared a throwback picture of her 13-year-old self on Instagram about working on the Halloween family classic and how it continues to inspire kids today.

"In 1998, this 13 yr old girl spent her summer playing the teenage witch granddaughter of Debbie Reynolds in the @disneychannel film #Halloweentown, having no idea what special magical life the film would have yearrrsss after it premiered," she wrote. "And here I am, on its 22nd anniversary, profoundly honored and humbled that people still want to watch it every year and share it w/their families."

"While I was so inspired by playing Marnie and by sharing the screen w/ Debbie and the amazing cast; I never could have known how much magic and inspiration you the fans would show me year after year." Brown's post continued. "I’ll never be able to truly express what it has meant to me. Happy Anniversary #halloweentown, Marnie is so grateful for all the magic."

Brown played Marnie Piper, a 13-year-old teenager who discovers she was a witch on Halloween and works alongside her grandmother to keep Halloweentown safe from evil forces. The late Debbie Reynolds, played her grandmother and matriarch of the powerful witch family, Aggie Cromwell.

Today, the actress is a wife and the owner of her very own Etsy shop, Craftily Creative, in which she keeps the spirit of Halloweentown alive with cute merchandise and quirky sayings from the movie. Her popular graphic t-shirt, “Being normal is vastly overrated,” was a famous phrase coined by the late actress Reynolds.

To get into the Halloween spirit like Brown, you can catch Halloweentown and Halloweentown II: Kalabar's Revenge on Disney+. If you don't have a subscription, the movies will air on Oct. 24 and of course on Halloween, Oct. 31, on Freeform.