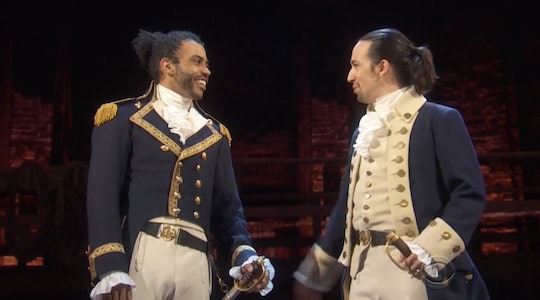 'Hamilton' Tonys Performance Is A Work Of Art

Hamilton has been pulling in countless awards and accolades, making tickets to the show are more than a little hard to come by. So when the world heard that the musical would be performed at the 70th Annual Tony Awards, there was more than a little excitement from the public (who, me?). Luckily, the Hamilton cast and crew did not disappoint, despite the change of scene from Broadway to the Tonys' Beacon Theatre. The Hamilton Tonys performance was pure magic, although a few changes took place for awards night (due to the tragedy in Orlando on Sunday morning, Hamilton decided to leave out the muskets onstage).

In case you missed it, Hamilton is a Broadway show that covers the trials and tribulations of Alexander Hamilton, an American founding father, through rap. It's been receiving rave reviews ever since it opened. As The New York Times reviewer Ben Brantley puts it, "It convinces us that hip-hop and its generic cousins embody the cocky, restless spirit of self-determination that birthed the American independence movement."

Apparently, the entire world agreed, because Hamilton was received a record-setting 16 Tony Award nominations. It went on to win a whole bunch of them as well, and then the cast put on an amazing performance of the Broadway show for Tony attendees, sans muskets.

The singing, rapping, costume design, and coordination was a serious work of art, and the cast played out "Yorktown" and "History Has Its Eyes On You." The scenes that the Hamilton crew played out on stage are usually gun-heavy in the Broadway show, but the typical muskets were missing in action tonight out of respect for the victims of the Orlando shootings. (Although, to be honest, I never would have realized they were gone if I hadn't heard about it.)

People who haven't been lucky enough to see the show on Broadway were excited to catch a glimpse of the award-winning musical, and they weighed in on Twitter. The reviews from the public were largely positive.

Lin-Manuel Miranda proved himself an amazing actor and writer, and he was joined by the equally talented Leslie Odom Jr., Chris Jackson, Daveed Diggs, Renee Elise Goldsberry, and Phillipa Soo. The entire production left no doubt that the show fully deserved its 16 nominations (and numerous wins).

If competition for Hamilton tickets was high before, it's going to be just about impossible to get tickets now. Personally, I'm just glad I got to see a snippet of the show at the Tonys — now I'll just have to keep my fingers crossed for a movie.