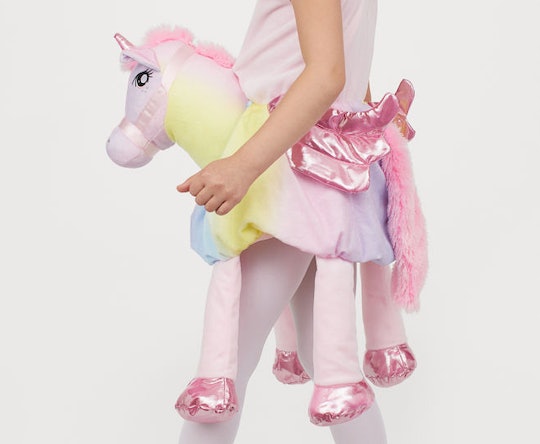 You Guys, This Unicorn Costume From H&M Is Too Magical For Mortals

Who doesn't want to have a noble unicorn as their best friend/steed? Alas, this mono-horned beast can only be found in legend... or can it? Scientists have just discovered a real-life unicorn, and... wait. I'm being told that this is an adorable child in a unicorn costume, but I'm honestly not buying it. Look at its glittery shiny feet, its glorious pink mane. If that's not a real unicorn, next thing you'll tell me is that Atlantis is not a real underwater city bustling with hot merpeople. OK, so maybe this is a fabulous pastel rainbow unicorn costume from H&M. But my god, look at its iridescent wings... has glitter science gone too far? And does it come in adult sizes?

Sadly, this costume only comes in sizes for 3 to 6-year-olds, and 6 to 10-year-olds, so my lifelong dream to merge with a glorious unicorn will continue to go unfulfilled, but that doesn't mean you can't make that dream happen for your child. Although be forewarned: should you allow your children to don this magical vestment of another unearthly realm, they may never want to take it off.

Allie Brosh's famous cartoon/blog post, "Menace," comes to mind, in which the artist recounts a time when she was given the immense powers of a dinosaur costume, which she refused to abdicate. Once your children become imbued with the powers of a unicorn, will they ever relinquish this power to become mortal again? Or will they live forever as the unicorn, only shedding their unicorn shell once they outgrow it, and hermit-crab-like, seek a new, roomier unicorn costume?

Will you merely have to adapt to life as the parent of a unicorn, rather than a human child? Having a magical unicorn as a child is no small task: you'll need to add a stable onto your home (filled with fairy-hay, of course), and your unicorn child will need plenty of enchanted meadows and fields to gallop in. And when your unicorn starts school, you'll need to make sure the teach understands that unicorns answer math questions by stomping their hooves, and that while the presence of a magical rainbow is indeed a distraction to the rest of the class, it is inevitable in the presence of a unicorn.

What sorts of magical powers can you expect from your child once they become a unicorn? Expect to deal with clouds of glitter, the materialization of golden butterflies, and breaking out into uncontrollable song every five minutes. Also, it appears this costume comes with wings, so technically your child will be a pegacorn, the most powerful of unicorns, capable of flight and magic beyond our human comprehension. This does, fortunately, look great on college applications.

If you want to grant your child the mighty and pure powers of a unicorn, you can do so for only $35 by buying the costume on H&M's online store. They also suggest styling with magical sparkling ballet flats, clip-on multicolor hair (likely harvested from Rapunzel herself), and might I suggest this Unicorn University shirt (Uni Uni, as alums like to call it)? Just remember to teach your child: no flying with a contrail of magical stardust and rainbows after bedtime. The neighbors are trying to sleep.