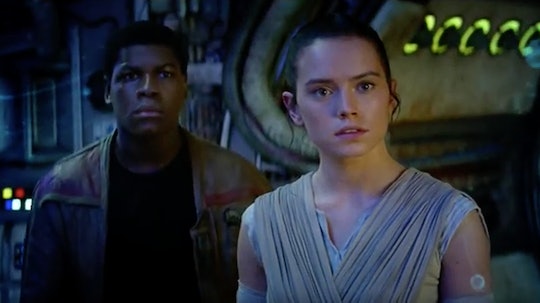 As the newest Star Wars film hit theaters this weekend, the question of actors' salaries for The Force Awakens has become a hot topic. According to The Daily Mail, Harrison Ford is making 76 times Daisy Ridley and John Boyega's salary for Star Wars: The Force Awakens. Ford will reportedly earn just over $34 million, while newcomers Ridley and Boyega's salaries reportedly sit at about $450,000 each. All three actors will take a cut of the movie's final revenue, which could equal a pretty penny — Variety reports that The Force Awakens has earned $238 million in its opening weekend — and Ford will take 0.5 percent of the profits. Ridley and Boyega will reportedly take a cut as well, although the exact amount isn't certain.

Ford's top-dollar payout is making headlines, but that's not the most interesting part of the Mail's report, in my opinion. The important part has nothing to do with Ford and everything to do with gender pay equality in Hollywood.

Although some are upset that Ford is earning a higher paycheck and getting a larger cut than Ridley and Boyega — despite the latter taking on leading roles — Ford's paycheck is totally understandable. Ford is one of Hollywood's best-known actors, having gone far beyond the Han Solo role to take on lead roles in Indiana Jones and Blade Runner, among many, many other iconic Harrison Ford roles.

Of course Ford commands a large salary — as with any employee with years of experience and expertise, he's going to cost more than those fresh out of college. Not to mention, Ford's salary for the first Star Wars film was just over $10,000, according to The Independent — a small chunk compared to the $650,000 Mark Hamill received, according to Yahoo! News reports. He worked his way up, and so it's not like Ford doesn't deserve a hefty paycheck, large as it may be.

The best news that's come out of The Daily Mail's salary revelation, in my opinion, is that Ridley and Boyega are earning equal amounts for their starring roles. It's been a big year for highlighting pay inequality in Hollywood, with many leading ladies stepping into the limelight to speak up about the wage gap. In Jennifer Lawrence's now-famous essay on the wage gap published in Lena Dunhan's newsletter, Lenny Letter, Lawrence admitted that she hasn't fought to receive the same, higher pay as her male co-stars. Why not? She's held onto a fear of being perceived as bratty or entitled — a fear that she suspects her male colleagues do not share:

"I'm over trying to find the "adorable" way to state my opinion and still be likable! Fuck that. I don't think I've ever worked for a man in charge who spent time contemplating what angle he should use to have his voice heard. It's just heard. Jeremy Renner, Christian Bale, and Bradley Cooper all fought and succeeded in negotiating powerful deals for themselves. If anything, I'm sure they were commended for being fierce and tactical, while I was busy worrying about coming across as a brat and not getting my fair share. Again, this might have NOTHING to do with my vagina, but I wasn't completely wrong when another leaked Sony email revealed a producer referring to a fellow lead actress in a negotiation as a "spoiled brat." For some reason, I just can't picture someone saying that about a man."

So to see one of the world's most famous franchises make the decision to step it up and pay newcomer salaries out equally, regardless of gender, is a great way to lead by example in an industry that seems to desperately need the guidance. Which just makes me even more stoked to see The Force Awakens, though I suspect the following trailer has a little to do with my excitement as well.