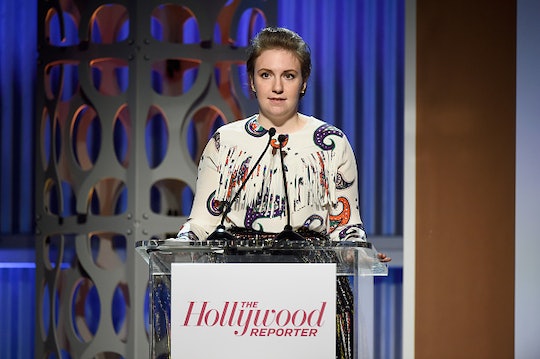 On Wednesday, The Hollywood Reporter hosted its annual Women in Entertainment breakfast, which gathers some of the best and most badass ladies in the business (#WafflesAndWomen, anyone?). After being announced as one on THR's Power 100, actress/director/writer/producer of girls Lena Dunham shared a powerful quote about sexism as she took the stage to address the room. "Some girls who grew up in the '90s dreamt of a luxury cruise with N'Sync," she said, "but my fantasy has always been a room full of Hollywood power bitches enjoying breakfast foods."

She went on to tip her hat to "power bitches" in the room for contributing towards the shrinking gender gap in Hollywood. "I want to thank all of you for brilliantly and stylishly cleaning up the mess that Hollywood has made of equality and diversity," she said. "Because after all, isn't that historically what women have been asked to do, clean up messes that don't belong to them and that they're not responsible for?"

In her usual poetic and humorous way, Dunham shined a spotlight on the need for diversity and equality in the entertainment industry. "This year, the conversation around this issue has reached a fever pitch, and it's forcing studios to answer uncomfortable questions, white male directors to take a hand mirror to their own privilege, and the industry as a whole to wonder just where along the line we forgot to be as progressive as we think we are," she said, adding that she's felt the change in her bones — Twitter being her bones — this year.

Don't worry, Lena, I feel it in my Twitter-bones too. This year has been a major one for women in Hollywood, and the following women have been at the forefront of the change in several kickass moments.