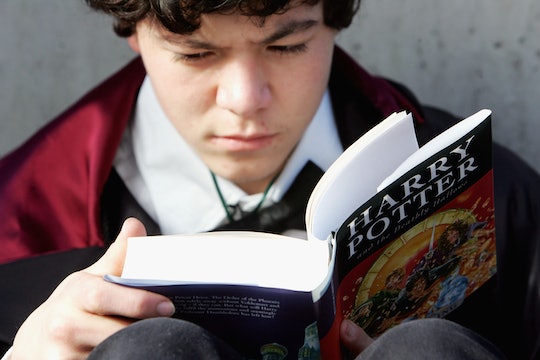 This School BANNED 'Harry Potter' Books For The Most Ridiculous Reason

I love Harry Potter very, very much. I raised my kids in peak Harry Potter years, when the books were still being released so we all had to wait to read about Albus Dumbledore, Hermione Grainger, and the whole gang. The only difficult thing for us was having to pull ourselves back out of the world of Hogwarts School Of Witchcraft & Wizardry into the super dull actual world. We just wanted it all to be real, you know? I guess not everyone is a fan. Also some people do think it's real, but bad real. Harry Potter books were banned at a Catholic school in Tennessee on account of people thinking the spells might be real, and boy do I ever wish that was true.

St. Edwards School in Nashville, Tennessee has made the bold and rather bizarre decision to take all seven of the Harry Potter books out of circulation for their students. St. Edwards is a pre-Kindergarten to grade eight school, in other words many of the kids are in the prime ages to be introduced to the magical world of J.K. Rowling's particular brand of magic. This appears to be exactly the problem. One of the pastors at the school. Rev. Dan Reehill, has decided that all of those spells in the books, your Expecto Patronums and Expelliarmus' and what have you, are probably going to work in our world of Muggles. And he's really not down with it, as per The Tennesseean.

Romper has reached out to St. Edwards School for comment and is waiting on a reply.

Rev. Reehill explained to parents via email, as per The Tennessean, that he had decided to consult with several noted exorcists (from the Vatican no less) and they were all pretty sure the spells and curses in the book looked legitimate:

These books present magic as both good and evil, which is not true, but in fact a clever deception. The curses and spells used in the books are actual curses and spells; which when read by a human being risk conjuring evil spirits into the presence of the person reading the text.

Rebecca Hammel, the superintendent of schools for the Catholic Diocese of Nashville, confirmed that Reehill notified St. Edwards faculty and removed the books from circulation after one parent contacted him with concerns. She also noted that he is "well within his authority" to ban the books, despite the fact that the Catholic Church has never expressed an official position on the wildly popular series by J.K. Rowling. In fact, in 2003 a Vatican spokesperson said the books were in line with traditional Christian morals and "didn't see any problems" with the books, as per The Guardian.

If Rev. Reehill is right about those spells working, all I can say is I'm thinking of at least three spells I would like to use right this instant.

It's difficult to believe that any school official or adult would take issue with the Harry Potter books, especially considering how many millions of children became avid readers because of them. But what is perhaps more difficult to believe is the idea that one man can choose to ban an entire school from reading books of any kind without any repercussions whatsoever.

I wish there was a spell to cure that kind of backward thinking.