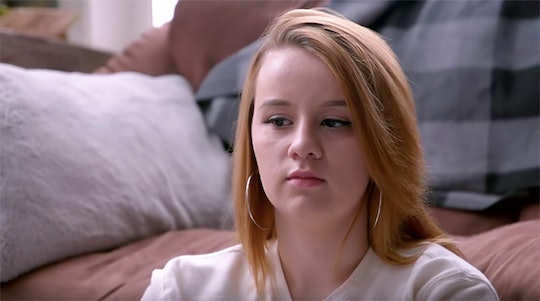 Teen Mom: Young & Pregnant star Kayla Sessler has had a rough go of it with her ex-boyfriend, Stephan. Not only did Kayla file a restraining order against Stephan, but the dad often struggles to put the couple's son, Izaiah, first. Luckily for the baby's sake, Kayla isn't afraid to stand up to Stephan regarding important matters. Case in point: Kayla didn't let Stephan's mom meet Izaiah at the TMYP reunion show.

After a tumultuous relationship with Stephan, Kayla found love with her new boyfriend, Luke. The basketball player is an awesome father figure to Izaiah, and he seems to treat Kayla really well. Luke even went as far to help set up Izaiah's first birthday party, which is a sweet gesture because those types of events can be stressful. But all hell broke loose after Stephan learned that Luke would be at the event, threatening to skip the party altogether over his bruised ego. Yikes.

Although Stephan ultimately decided to go to the party, he stayed outside the entire time while chatting with his mom Annette via FaceTime, complaining, according to MTV: “My blood is boiling, Ma. I’m disgusted."

Speaking of Annette, she finally requested to meet Izaiah during Monday night's reunion episode, a meeting Kayla flat out denied. And to be fair, Kayla had good reason to be upset. Why? Annette never took the opportunity to meet Izaiah despite Kayla's open door policy regarding visitation. When the grandmother asked Kayla to make the meeting happen on the show, she replied, according to MTV: "Why should it be on a TV show? No effort has been made."

Annette then snaps back: "That's fine then, you can keep your baby." Ouch.

Many people applauded Kayla for her stance, especially given Annette's shocking response.

"Yes girl everything you said was right on point!!!" one person tweeted. "I respect you for standing your ground especially when you said 'meeting my son should not be apart of a tv show.' That’s the damn truth..."

Someone else chimed in: "Way to go Kayla for sticking up for yourself and your son."

"Good for you @kayla_sessler! When you see how his mother behaves it’s not hard to understand about how he was raised and his subsequent treatment of women," another person commented. "You keep being a wonderful Momma to that sweet boy of yours, stay strong."

As for Stephan? Kayla claims he doesn't have a relationship with little Izaiah. "Stephan and I have no relationship. He doesn’t see Izaiah," she explained, according to Radar Online. "When I got a new boyfriend he shied away a lot."

It sounds like Kayla, however, isn't too bothered by Stephan's behavior anymore. Want some proof? Look no further than Kayla's recent Instagram post on New Year's Eve.

Although it's disappointing that Stephan and Annette put their feelings ahead of Izaiah's needs, it sounds like Kayla is doing a fantastic job all on her own.