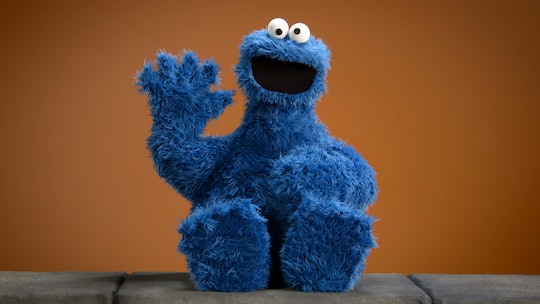 One of the hardest things to explain to little kids is that they can't actually hang out with their favorite TV characters. But your toddler's days of hopeless yearning could be behind them, thanks to Hasbro's HasLab crowdfunding campaign, which gives you the opportunity to bring home a full-sized, posable replica of Cookie Monster. Calling all Sesame Street stans.

The campaign is part of Hasbro's celebration of Sesame Street's 50th anniversary, which companies everywhere are getting in on. From stamps featuring the Sesame Street gang to specialty cupcakes from the likes of Baked by Melissa, there are oodles of special products to honor the happiest street in the world. And Hasbro is leaning on HasLab, their crowdfunding platform, to make their celebration extra special.

Hasbro created HasLab in 2018 with the intention of "target[ing] fans directly by putting dream products into their hands," as a company press release states. The initiative allows the company to make specialty products they may not invest in otherwise, as the items require more time and resources. The first campaign gave Star Wars fans Jabba’s Sail Barge, a detailed replica designed with collectors in mind. Collectors sure did respond: The company needed 5,000 backers for the campaign and received nearly 9,000. It was the success of that first venture that led to the new Cookie Monster campaign project.

The campaign's goal is to provide Sesame Street super fans with a poseable full-body replica armature of Cookie Monster they can keep forever (as you can see above). The replica measures in at 38 inches, which gives you a much better view than your TV can. It also comes with premium retro packaging, two original artwork lithographs, and a Certificate of Authenticity to prove it's the real deal. As the HasLab page explains, the designers "consulted with leaders and influencers in the Muppet fan community to voice fan opinion about character choice, product development, offering, and messaging — making this a by-the-fans, for-the-fans project, every step of the way." The research paid off; he looks so real I feel like I should hide my cookie jar.

"To be able to own their very own version of a character has been a wish of Sesame Street fans for years, and we’re delighted to put the opportunity into their hands for the first time," said Tyla Bucher, Vice President of Global Brand Strategy and Ecommerce Marketing, in the same press release. It's the details that set this model apart, like how easy it is to put the figure in such a wide variety of poses. And those extras are what make the crowdsourcing necessary.

Participants have to contribute $300 to the Cookie Monster crowdsource campaign on the HasLab page by August 25 to be eligible to get their own replica. If the campaign receives a minimum of 3,000 backers, production will begin, and participants should get their replica by spring 2020. Cookie Monster is definitely a little pricey, but you won't be charged unless the minimum is reached, so at least it's not a risky investment.

I recommend big Sesame Street lovers make their donations now, and start spreading the word to your fellow fans ASAP. It's up to you to make every Cookie Monster-lover's fantasy a reality.