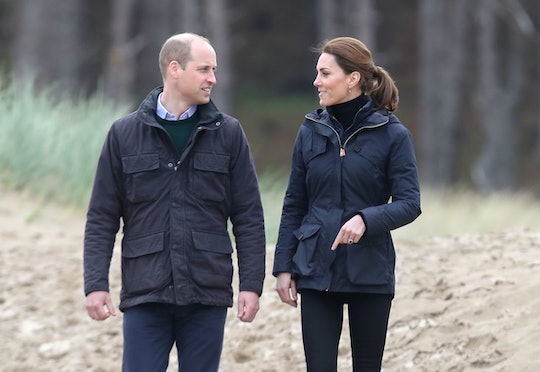 It's been a busy week for the newest member of the royal family. Since he was born on May 6, little Archie Harrison Mountbatten-Windsor, Meghan Markle and Prince Harry's newborn son, has already met with reporters, hung out with his great-grandma, Queen Elizabeth II, and celebrated Mother's Day with his parents. With all that excitement and important meetings happening, royal fans may be wondering if Kate Middleton and Prince William have met baby Archie yet? Good news: it sounds like a sweet meeting will be happening soon.

While the Duke and Duchess of Cambridge — aka Prince William and Middleton — have not yet gotten to lay their eyes on the newest royal baby, there is reportedly a plan for them to pay him a visit tomorrow, on Tuesday, May 14, according to People. Then, Uncle Will and Aunt Kate will finally greet their new nephew (and hopefully, future sleepover buddy for their own three kids: Prince George, Princess Charlotte, and Prince Louis) for the very first time.

Hopefully royal fans will get to hear how baby Archie's meeting with his aunt and uncle goes. And, if we're lucky, maybe we'll get some photos! But it's probably safe to say that Prince William and Middleton will be ooo-ing and ahh-ing over their newest nephew just like the rest of the world has been for the past week. In fact, according to Us Weekly, Prince William previously shared that he was "looking forward to seeing" his younger brother and he's already welcomed new dad Prince Harry to "the sleep deprivation society that is parenting," according to Marie Claire.

Baby Archie's calendar is actually quite full this week. According to ELLE, this week's visitors will also include grandad Prince Charles, who's expected to stop by a few days after Prince William and Middleton meet the newest royal.

As royal reporter Omid Scobie shared on Twitter earlier on Monday, "Sources confirm that Prince William and Duchess Kate will be meeting baby Archie for the first time early this week. Grandfather Prince Charles will be paying a visit a few days later."

Ahead of these upcoming meet-and-greets, it sounds like baby Archie has been enjoying some precious time at home with his parents, along with a few other family visitors, such as Lady Jane Fellowes, Princess Diana's sister, aka Archie's great-aunt, according to the Daily Mail. And Archie has already spent lots of quality time with Markle's mom, Doria Ragland, who's been in the U.K. since before the Duchess of Sussex gave birth, according to Harper's Bazaar.

In between visitors, it sounds like Prince Harry and Markle have been enjoying their new roles as mom and dad and they also quietly celebrated the American version of Mother's Day this past Sunday, (England's Mothering Sunday was celebrated on March 31 this year), according to The Sun.

Tomorrow's visit between baby Archie and Auntie Kate and Uncle William will undoubtedly be very special. There's nothing like having a sibling and getting to watch your kids and theirs grow up together, and the expanded royal family will have an absolute blast in the years to come.