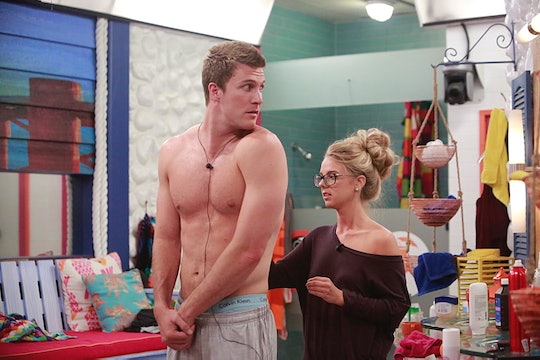 Have Nicole & Corey Hooked Up On 'Big Brother'? They Share The Same Bed A Lot

With the majority of the Big Brother 18 house currently involved in showmances, it's hard not to speculate about each of them and wonder how far they've gone and how long it will take each of them to crumble. Because when the season's over, there's only one winner and at some point, these showmances are going to have to disperse. The first couple to dissolve may be Nicorey. But have Nicole and Corey hooked up on Big Brother just yet? You have to admit, that among the hot and heavy antics of Paulie and Zakiyah and the too-adorable-for-words-pairing of Natalie and James, Nicole and Corey seem to have a hard time of fitting in. It's like they aren't even sure if they're a thing, despite their late night cuddles on the Big Brother live feeds.

While no one has come right out and said that Corey and Nicole hooked up on Big Brother, except for maybe Paul, who never claimed to not have a big mouth, my money would be on yes anyway. At least, the third base variety, if not the actual real deal. We've seen the two of them kiss, cuddle, and flirt incessantly, but Nicole is also obviously all too aware of the fact that cameras are on them at all times, and she doesn't seem too keen on the world seeing them get busy. Can you really blame her, though?

As of right now, the status of Corey and Nicole's physical relationship is anyone's guess. But it'd hard not to assume that what is going on beneath those covers on night vision is exactly what all of out dirty minds are assuming is going on. The thing is, though, they're totally allowed to hook up. Both of them are single and sometimes, before it gets down to the wire, it's kind of useful to be part of a showmance to have at least one ride or die teammate.

There is also the fact that Twitter goes mad crazy any time there is the possibility of Nicole and Corey hooking up on Big Brother. Like true die-hard fans, they tend to speculate on each minor movement and sound coming from the couple, and it's kind of amazing.

Whether or not Nicole and Corey hooked up on Big Brother, the fact remains that eventually, one of them will be voted off the show, and an end will come to Nicorey as we know them. In the meantime, though, you can look forward to the late night feeds where all of the possible hooking up of varying degrees tends to go down.