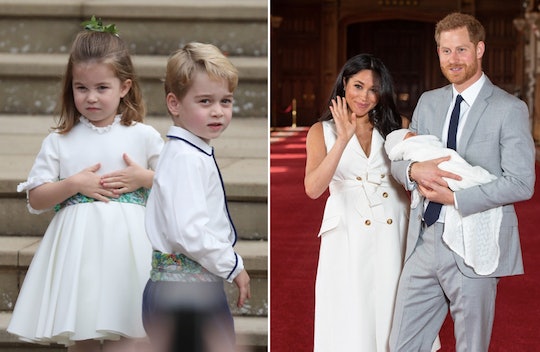 When news first came out that Meghan Markle and Prince Harry were expecting a baby together, royal watchers were excited for several reasons. First of all, the couple were so clearly over the moon with excitement that it was infectious. How could you not be happy for them? But also there was the royal cousin aspect of it all. Prince Harry's brother Prince William has three gorgeous children with wife Kate Middleton and the prospect of seeing the royal cousins all together was pretty exciting. Now that the royal baby is here, however, have the Cambridge kids, like Prince George and Princess Charlotte, met baby Archie? Because we obviously need this to happen as soon as possible.

Master Archie Harrison Mountbatten-Windsor was born on May 6. He is the first child for the Duke and Duchess of Sussex, and if anyone happened to catch Prince Harry speaking with reporters after his son was born you know — he was beaming from ear to ear. Excited to share the happy news with everyone, although presumably extra happy to share the news with his own family.

Since Archie's birth, the baby has reportedly been introduced to Prince Harry's great-grandparents, according to The Daily Express, Queen Elizabeth and Prince Phillip, as well as Markle's mother Doria Ragland, his grandma. The meeting was captured in a lovely photo that the couple shared on their official Instagram page as a way of officially announcing Archie's birth.

While it was exciting to see the Queen meet her newest great-grandson, royal watchers were especially interested to see the Duke and Duchess of Cambridge meet their new family member with their children in tow; 5-year-old Prince George, 4-year-old Princess Charlotte, and 1-year-old Prince Louis. After a week of waiting (and working hard with their royal duties, naturally), Buckingham Palace confirmed that Prince William and Kate Middleton met their new nephew on Tuesday evening at the Sussex's home at Frogmore Cottage in Windsor Castle, according to People.

But unfortunately, they went without their own children.

Now before anyone goes stoking those old rift rumor flames again, the Duke and Duchess of Cambridge had to visit in the evening after they were done their royal visits for the day. Both Prince George and Princess Charlotte attend school in London, so taking them out for the visit to Windsor Castle could have disrupted their schedules. Also let's face it; for anyone who has tried to visit a new baby with your own kids running around, it can be a little much.

And for those people wondering why it took so long for the Duke and Duchess of Cambridge to meet their new nephew, please bear in mind that this is something of the norm for the royal family.

Prince Charles and his wife Camilla Parker-Bowles, grandfather and step-grandmother to Archie, have yet to meet the new baby themselves, presumably due to busy work schedules. They are, however, expected to visit on Thursday evening, according to Hello! Magazine.

When Mia Tindall was born, 4-year-old daughter of royal cousins Zara and Mike Tindall, she didn't meet her cousin Prince George until she was 2 months old, as her father previously told The Daily Express.

The reality is there is simply no rush. Meghan Markle and Prince Harry need time and space to figure out parenting, and the rest of the family appears to understand that. That being said, I cannot wait until we get a picture of the royal cousins together. Whenever that may be.