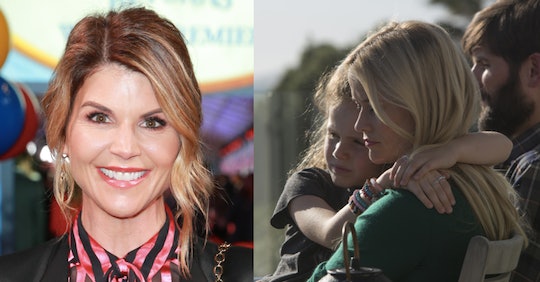 Dear Aunt Becky: Have We Learned Nothing From 'Big Little Lies'?

It's a pretty standard story: mother wants what's best for her kids, and she'll do literally anything to make it happen. It's why moms travel upwards of six hours to take their child to a gymnastics class that will prep them for the Olympics, why they kill themselves working three jobs to rent a house in a good school district, why they'll push their children to take up extracurriculars and volunteering and school clubs so their college applications are full. But that positive reinforcement, that I'd-do-anything-for-you mentality is also breeding some toxic perfectionism in kids and look, did we learn nothing from Big Little Lies?

What happens when we paint a picture of perfection? We alienate, we overwhelm, we hurt — and it's evident in every aspect of the award-winning HBO series. It's there when Madeline's daughter Abigail decides to live with her father and stepmother because the pressures of Madeline (Reese Witherspoon) — always pushing for better SAT scores, incessantly talking about getting into a "good school" — are too much for her to handle. It's there when Celeste's (Nicole Kidman) son becomes a first-grade bully, having seen the physical pain inflicted on his mother by his father — pain Celeste endures because she wants to maintain the look of a good, perfect family. It's there when Jane's (Shailene Woodley) son Ziggy lashes out at her in frustration over who his father is — Jane hasn't sought to pretend things are perfect, but she's attempted to present a clean slate, and simply forget what came before.

We can see the damage here, now, in real life, watching Lori Loughlin and Felicity Huffman caught up in a college cheating scandal, both under investigation for an alleged "conspiracy to commit mail fraud and honest services mail fraud," as CNN reported. According to all the reports, the actresses paid large sums of money to have their children go to colleges they weren't otherwise qualified for. Huffman is accused of allegedly paying $15,000 to a fake charity to "facilitate cheating for her daughter on the SATs," per FBI paperwork. That $15,000 allegedly paid for a 400-point increase.

The show looks at how the art of curating a Pinterest-perfect life can overwhelm, stress, and hurt your children.

For Loughlin, there's even more money involved. CNN reported that in the complaint, Loughlin allegedly "agreed to pay bribes totaling $500,000 in exchange for having their two daughters designated as recruits to the USC crew team, even though they did not participate in crew."

It's... a lot of money. For most of us, it sounds ridiculous. Why not just send your child to a school she's qualified for? Why would you risk your family, your career, your entire life over the name of the college your child attends? Why are you pushing your child down this one-way street?

It's what you yelled at the TV when Celeste realized one of her sons was the bully in his first grade class.

It's what you yelled at the TV when you watched Jane try to gloss over her rape when Ziggy lashed out.

It's what you yelled at the TV when you watched Abigail and Madeline's relationship deteriorate further, straining under the weight of perfectionism. Why are you pushing your children down this one-way street?

Big Little Lies' many subplots are weaved together with the golden thread of perfectionism. Perfect house, perfect children, perfect marriage — the show looks at how the art of curating a Pinterest-perfect life can overwhelm, stress, and hurt your children.

This storyline is resoundingly backed by science. Katie Rasmussen, author of a paper, “It Has to be Perfect!”: The Development of Perfectionism and the Family System, published in the Journal of Family Theory & Review, told BBC, “As many as two in five kids and adolescents are perfectionists. We’re starting to talk about how it’s heading toward an epidemic and public health issue.”

Heading toward an epidemic and public health issue — we are used to hearing those words on the heels of things like measles. But perfectionism? It's hard for parents to draw the line between keeping their children happy and successful and overwhelming their children to the point of increasing their risk of depression and anxiety.

If Big Little Lies has taught us anything, it's that they know. The kids always know.

In Big Little Lies, Celeste struggles with breaking up her children's family and home. "He would never hurt the boys," she tells a therapist of her husband Perry (Alexander Skarsgård), unaware that her twins have seen more than she could ever imagine.

Madeline is desperate for her daughters to be successful, to be independent, to have some purpose in life. But as she rants about Renata (Laura Dern), and the other "career mothers," she has an air of superiority. She's a mother whose sole focus is her children — what could be better for them, right?

Jane wants her son to forget about his father, to focus on how good it is with just the two of them. She wants to move to Monterey, put Ziggy in a good school district in a good community, and have literally no one ask about her real story.

And it all comes at an unwaveringly high cost.

Thirty-three parents were arrested in the investigation dubbed Operation Varsity Blues. Together, those 33 parents "spent anywhere from $200,000 to $6.5 million to guarantee admissions for their children," according to CNN, and several reports have stated that in some cases the kids had no idea. They didn't know the strings their parents were pulling in the background to make them fit, to push them forward, to fulfill their perfect picture.

But if Big Little Lies has taught us anything, it's that they know. The kids always know. For all the memes out there that tell us cutesy things like, "your kids won't remember what you wore or what you made for dinner, but they will remember how you made them feel," there's an air of truth. They know how to recognize love, and they also know how to recognize desperation, disappointment, aspiration.

With Season 2 of Big Little Lies starting soon, I can't wait to see where the characters are after putting an end to one of the most damaging influences in their lives. I hope that they have space to be less than perfect. That Celeste's boys can move from the death of their father — and the end of the abuse of their mother — to break free of the Insta-perfect life they were stuffed into before. That Jane can find the peace to start over, as herself, and not some shiny hologram floating through life without a story. And that Madeline's opening up to Abigail about her own "perfect" life can create a new golden thread, one that binds them together like no level of checked boxes on a list of Ideals ever could.

Sometimes fiction is just fiction, and sometimes you can see the story for what it is in the broadest sense — a murder mystery, a college scandal. But the story rings true: a parent would do anything for their child, no matter the cost.